PLEASE consider a (little) donation!
Our bills are sky high (for food and vet)
every little thing counts!

​We rely on YOUR donations!

We were very afraid to neuter BAMBI because although I brought her up from just born, she's a real savage (always running and jumping!) and we were afraid that she would cut the stitches but last week we had to neuter her as she's already over 1 year.
Everything was going very well so we were so happy but yesterday (after more than a week) she cut the stitches!
No need to say how upset we were/are!
Today I've contacted our vet and was advised to put a collar on her (so she can't lick the wound) and give her antibiotics but the vet doesn't know her, haha, she would take off a collar within 5 minutes!
So I've put a body suit on her. At first a smaller one but as she has such a long body it didn't close so now she's wearing a bigger one which is a bit too big but at least she can't lick her wound.
She's not pleased at all....
​And I'm off to take care of all my injuries.... and also not pleased at all.... haha!

TOYA is doing well! Her ear is healing slowly and her burned face is also getting better.
We're not sure if her back leg (broken ankle) is healing as we have to let her out of the cage also a couple of times a day and although she's walking (running!) on it, time will tell if it's healing properly.

We had to let BAMBI out of the cage today as she was going crazy.
Of course we're keeping her inside and she's looking good!
​

​15th September 2021
​
BAMBI went to the vet today to be neutered and microchipped.
Usually we neuter our cats when they're 6 months old but Bambi was/is very hyper active and we were afraid that she would cut the stitches so we waited but she's over 1 year old now and we HAD to to it.
The vet was asked to check her chest as we're always feeling a bone sticking out and after examination the vet told me that the chest bone was normal but that the rib cage seemed to have an abnormal shape.
X-rays were taken and showed that her rib cage is VERY small (narrow) and also longer than usual and her heart isn't in the right place!
At least her heart is working well (for now) and this problem isn't bothering her (for now) but when she comes older it could give her certain problems, i.e. asthma or her lungs could be filled with fluid so we'll have to keep a close eye on her.
After all these years we still come to new things all the time!
Because we didn't trust her after this surgery (she would be running and jumping!) we decided to keep her in a cage for a few days so she'll have some rest.
​Bambi isn't amused at all......

Emergency visit to the vet this evening!
We noticed that RUDY was going on the litter box all the time, sitting down for a long time but he didn't do anything.
When we see something like this ALL alarm bells start ringing as usually this means that he's blocked, what can be fatal within 24 hours!
So we rushed him to the vet but fortunately he wasn't blocked.
A few drops of urine with blood came out so he has a bladder infection and has antibiotics for the coming 10 days and a painkiller for 5 days. 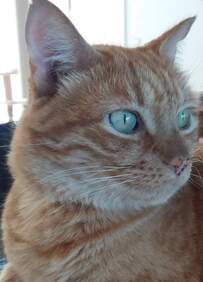 ​After a lot of sadness there's also good news... and we need this!
TOYA is doing very well!
Her left ear was massacred by a car engine and looked very bad but little by little, with a lot of TLC, it's coming better.
The burn on her face, most probably caused by a silencer, is also healing and it looks like her broken ankle is also getting better.
Everything takes time to heal but we have high hopes that everything will be ok eventually!

This morning the vet called me early, what usually isn't a good sign.
I was holding my breath and feared the worst....
She started telling me that Purdy was very bad, she was only laying down, she was turning yellowish again so most probably the jaundice came back, it seemed that she lost her eye sight again and she was already in a sort of coma.
I knew what was coming.... she said: "she won't come better again, the drip isn't helping her so in my opinion it would be kinder to take the decision".
We know that our vet would NEVER advise this if there would be any hope so there wasn't any other choice..
We were devastated, especially because after all these weeks she seemed to come better (the jaundice was gone and she regained her eye sight) but we couldn't do anything else than sending her over the rainbow bridge.
We'll never get used to this horrible decisions and we're very very sad....
Fly high little angel, you were loved so much and our biggest wish was to save you but unfortunately wishes don't always come truth...
You'll be in our hearts forever. 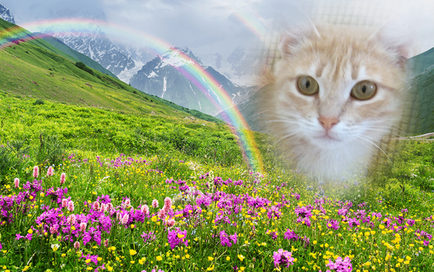 We were hoping that we could get Purdy home today but this morning the vet called us and told us that she wasn't doing well so she had to stay in the clinic.
Hopefully better news tomorrow!

PURDY is still on drip in the clinic. 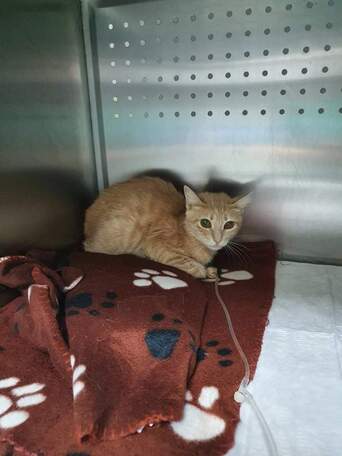 We took PURDY to the vet for a check up.
She wasn't doing very well... she was eating but only a little bit (by far not enough) and is still skin and bones.
An ultrasound and blood tests were done again and the result was that she has severe kidney failure.
This was unbelievable as 6 weeks ago she didn't have any kidney problems but for sure the medicines she had for 6 weeks (Doxycycline) didn't help her kidneys. Unfortunately this medicine was needed to cure the jaundice.
The good news was that the jaundice is gone and that she has her eye sight back! We already expected this but we were afraid that it was only wishful thinking...
When the vet checked her mouth she found out that the gums were very pale and that some roots were showing which caused her severe pain! No wonder she wasn't eating!
Surgery was planned straight away and this evening she was operated. Two teeth (molars) and roots were removed and now she has to stay in the clinic on the drip for two days.
​Hopefully she'll recover soon! 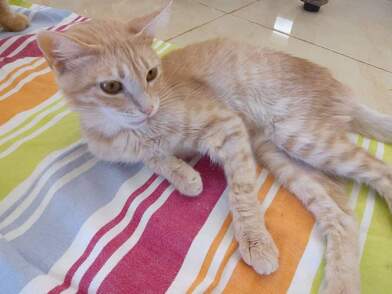 TOYA is doing well but her ear still looks horrible!
I'm treating it with Biafine (for burns) in the morning and with Manuka Honey in the evening and it already looks less red; hopefully it will heal soon.
She's very lively and we can only hope that her back leg will heal with cage "rest"-.... 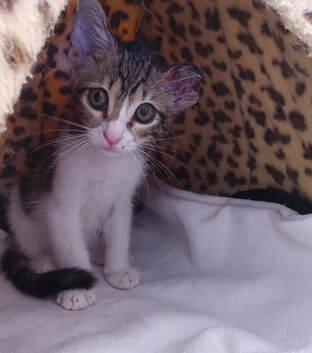 1st September 2021
A very sad day....
This morning Bella didn't want to eat, what never happened so we knew something was wrong with her.
We took her inside and put her in a bed, monitoring her all day and it was obvious that she was passing away...
We decided not to take her to the vet (yet) as that's always stressful and were hoping that she would pass away peacefully at home, our prayers came true as at around 11 pm she passed away peacefully.
Of course it's sad but we're grateful that she was with us for such a long time, she was over 15 years old and suffered from epilepsy since she was 8 months old and had medicines her whole life.
Fly high sweet Bella. 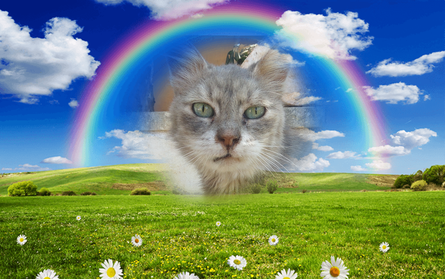 Last Monday we took in a kitten who fell from a car engine when the car was started and she was taken to the vet.
An X-ray showed that she has a broken ankle and she has several burns on her face and legs.
She's on antibiotics and painkillers and her burns have to be treated with saline and cream daily.

We've had many kittens and all of them showed their happiness but we never had a kitten who was so extremely happy to have a bed and good food!
NO car engines for her anymore!

We've named her TOYA, after the car she was found in (a Toyota).