On the 11th October 2012 we got a phone-call that a very little kitten was found in a field in Qormi.
He was crying and screaming for a couple of days but the gentleman who eventually rescued him (Ambrose) couldn't find him and stayed searching for him the whole night...
Finally he found him at 4 in the morning and a few hours later he brought him here.
We had a shock when we saw him because his leg looked very bad and we thought it was broken. We took him to the vet who said that it looked really bad, the skin and muscles were already necrotic.
X-rays showed that the big bones were not broken but because of the severe inflammation the small bones couldn't be seen.
The only advice the vet could give us was: clean, clean, clean and give him antibiotics and painkillers to try to save his leg. If we wouldn't succeed, his leg had to be amputated.
He was so tiny... his weight was only 300 grams....
But of course we did everything possible: cleaning his leg every 3 hours, first in Saline, after that a dip in Betadine...
Poor little thing! He's so sweet!

Please click on pictures for a bigger image.
On the 17th October 2012 we took him to the vet again for a check up and she said: "You made a miracle! I never
expected this!"
We were so happy (and proud!).
The skin is healing and now we are desinfecting just the same a couple of times a day and once a day we put a cream on his leg with a bandage which has to stay for a couple of hours to make the skin heal.
He's a very happy kitten and he even started running and playing!
27th October 2012
1st November 2012
Bro was taken to the vet for examination and his leg is completely healed!
No medications anymore!
We're so happy that we saved his leg from amputation!

4th November 2012
We never had a kitten who is so hyper-active! He's playing with the big cats and is afraid of nobody!
From the other side he's just a baby and likes to cuddle and sleep on our lap.... he needs a lot of company!
We didn't put him on the adoption-page because we'll wait and see if somebody who's right for him will come up. Otherwise he will stay with us forever....

Bro was taken to the vet because his front leg came more bended and it seemed he had more pain.
Four X-rays were taken and the result shocked us: he has a big infection inside the bones which will be very difficult to cure. He will have to take antibiotics and painkillers for 4-5 weeks; in 2 weeks time there will be another check-up but it doesn't look good at all.
If the antibiotics don't work, his leg has to be amputated....
16th July 2013 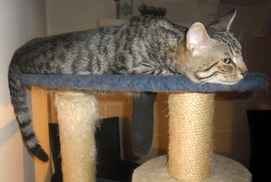 23rd July 2013
Bro went to the vet again for a check-up.
The plaster was cut, stitches removed and everything looks very good!
Another 4 weeks in plaster and hopefully by that time he will have a beautiful straight leg! 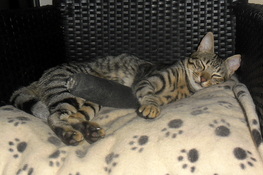 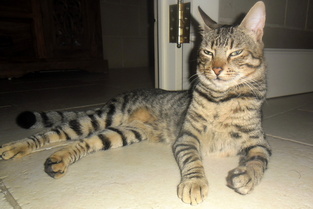