​Two tiny kittens were saved from a dangerous place. They are still scared as they had a bad start in life but they are safe and sound in our care now and we're hoping to find a lovely home for them together, we won't separate them.

13 June 2016
Our work is not always easy. We encounter a lot of ups and downs - fortunately more ups than downs- but now and then something makes us VERY happy. This can be a donation, which doesn't happen so often, but also an update from one of our homed cats who found a SUPER family.

This time we've received a letter from Oscar, who was homed in the Netherlands 4 years ago:

Hi Antoinette,
It’s been a while since you’ve heard from me and I would like to let you know that I’m doing very well! Mummy will attach some pictures and as you’ll see I’m still very good friends with my catfamily, Najma and Pipi. I love to play and hunt with Najma but when I just caught a little mouse and was preparing it for her in mummy’s back garden –she calls it torture… no idea why… - Najma came to help me… then I’ve eaten the mouse half alive… Mummy tells me that hunting makes the wild Oscar alive and that she prefers the Oscar who’s sleeping on her lap. Here Josh and me are sleeping on a chair together…
From Pipi I’ve learned a lot but I still don’t like his rough battles, first he starts washing my face and all of a sudden he hits me…. this made me very angry some time ago……
In fact I’m never angry but I’ve growled very loud at him and Pipi and mummy were both very impressed. Mummy told me that I should do this more often.
Together with my mummy I love to read the news on your site and I’m still very happy that you’ve taken me to Nieuwegein!
Love from Oscar and family

3 June 2016
Katy became more and more sick. She could hardly breath, hardly ate anything and was loosing more weight every day.
Although we have always taken her to a very good vet, we couldn't believe that nothing could be done for her and decided to take her to another vet for a second opinion, the best vet on this island: Dr Borg.
She examined her for about one hour and couldn't believe the state Katy was in, she couldn't even find any intestines; most probably she had a diaphragm when she was hit by a car, which came bigger little by little and all her intestines went into her chest.
We were hoping for a miracle but unfortunately nothing could be done for her so we had to take the most difficult decision...
​Goodbye dear Katy. 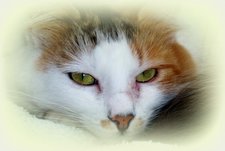