Munchy went to the vet for a check up.
He's much better but because his back legs are still a bit infected he will have antibiotics
​untill the end of this week.

​A male was neutered. 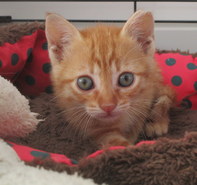 ​The kitten who was rescued last Saturday is doing very well and is bringing a lot of joy in our cat household.
We named him Baby Champ.

Katy is skin and bones but at least she's a bit better these last days.
​She's keeping the medicines inside and is eating a little bit.

​We took Munchy to the vet as he lost fur on his back legs and it's infected.
He got an antibiotic injection and an antibiotic course for a week.

We attended the Silent Protest March for the CHANGE AND ENFORCEMENT of LAWS in St. Julians today.
It was great to see that so many animal lovers were there! 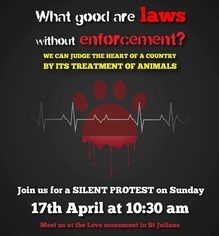 An abandoned kitten was found in the middle of the road in Swatar and was brought here.
He's about 5 weeks old and has some injuries on his little front paw and has a cut in his ear.
He's very dirty but not to upset him more, we'll leave him a couple of days and then we'll give him a bath.

Katy was still not feeling well so we took her to the vet again last Wednesday (6 April 2016).
Her temperature was fine and she was quite alert that day, but something had to be wrong as she was still vomiting every now and then and hardly eating.
An ultrasound was made and another X-ray was taken but nothing abnormal could be found.
Very frustrating, also for the vet, and we decided to do another test with a contrast fluid as it looked like something was wrong in her stomach.

We took her to the vet on Sunday morning (10 April 2016) at 7 am; the contrast fluid was given and every 20 minutes an X-ray was taken (later every hour) to see where the fluid was going.
At 1.30 pm she was ready and the vet showed the X-rays. It seemed that something was wrong in her (food) pipe as this was widened in one place and food could remain there, what could cause acid and could be the reason for her not feeling well and vomiting.
She was prescribed to some other medicines, one of them to kill the acid, so we're trying to give her this but unfortunately she's vomiting straight away when medicines are given.

This is a very frustrating situation as the medicines seem to make the situation worse and we don't know what to do.
We never had anything like this and we can only keep our fingers crossed...

For the rest everything is fine with all the other cats. They are enjoying their new cat house and gardens but still a lot has to be done.
​Soon the website will be updated!

If you are following our updates and you like the work we're doing, please consider to support us monthly!
We need approximately € 1000,-- monthly for food and medication but funds are running very low....
Please help us with your kind donation.
Thank you so much!