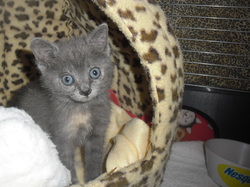 The kitten with the infected tail –we named her Sophie- had to go to the vet for a check-up and we decided to take the other kittens also.
It’s not known yet if she can keep the rest of her tail.

We are doing our very best to save it but we’ll have to wait and see how it goes. 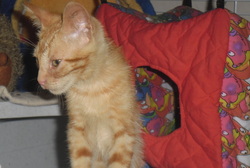 Odin was already much better but was still sniffing a bit.
We’ll keep on giving him antibiotics and hopefully he’ll be ok in a couple of days. 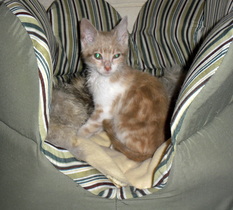 Completely recovered from cat flu but we’ll give her antibiotics for a few days more. 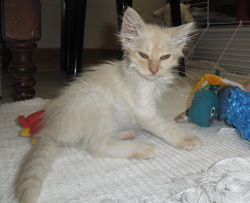 Had a very bloated tummy and was feeling very hot.
Her temperature was 40.2!
She had an injection to lower the fever and in the evening she was already much better!

These four kittens will go to their forever loving home in The Netherlands!

The kitten was taken to the vet – dr Delphine @ Centru San Frangisk- and she decided to amputate half of her tail and try to save the other half.
Keep fingers crossed as it’s very difficult!
Laura Wanders is going to adopt her also so 4 of our kittens will have the most beautiful home!

A team of Dutch students came to to film us.
The documentary has to be composed (will follow later) but it was a very pleasant day with these lovely people!

A kitten with a very infected tail was found and rescued in the evening.
When she was brought in, maggots were coming out of the wound! We never experienced something like this and did everything to make her comfortable: washed her tail, gave her antibiotics, painkiller and anti-inflammatory and spoke to our vet, dr Trevor Zammit, how to stop the maggots coming out… It was a real panicking situation!!!
He advised to put some drops of Frontline on top her tail as this would kill the maggots and it worked! After one hour all the maggots were killed and the kitten could have a quiet night….


Very good news today! Our friend and sponsor Laura Wanders is going to adopt these three kittens!
They will fly to the Netherlands in October. 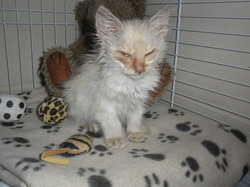 A kitten with infected eyes was rescued.
We are medicating him and hopefully we’ll find him a very good home!


In the evening we went to the “Classics under the Stars” concert.  The government is organizing this event every year; the tickets are for free but the audience is asked to donate to the animal charity organizations.
We all teamed up and collected donations during the break.
We saw some people donating “invisible money” (acting like putting money in the box) and some people just said “no” Unbelievable!

A mother cat and her 3 kittens are living in a very dangerous situation so we went to catch them.
The mother cat was caught but the kittens stayed in a pipe in the pavement and were impossible to catch…
We had to release the mother cat because she’s still feeding the kittens. Hopefully they can be caught next week.

We managed to catch another two kittens who are safe now and medicated.

A colony in Mellieha is living in a very filthy environment and all the 10 kittens who are living there have infected eyes.
We decided to catch them all and neuter the mother cats in a few weeks’ time.
Today we caught six, who went all to one of our very dedicated volunteers who's medicating them and when they are all healthy we will try to find the very best homes for them.

One of the females who was neutered last Thursday was taken to the vet again because she had a swelling.
At least it’s not an infection but a swollen mammary gland.

Three females were caught and neutered.

The Office of The Prime Minister and The Malta National Philharmonic Orchestra, will be teaming together for the concert Classics Under The Stars, held at Girgenti Palace on June 20th, 2014.

For the second year running, this concert will be free of charge for the general public, and will be encouraging those present to donate in aid of the animal sanctuaries in Malta.

Today we were present at the press conference to launch this event and tonight it was aired on all Maltese TV stations. 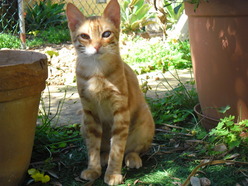 Mickey had his second vaccination and his eyes were checked again.
He's doing so well!

Saviour, who had an infected front leg, was released today.

He recovered completely and although it's always very difficult and sad for us to take a cat back to his colony, he was very happy to be free again.
He ran out and we couldn't even take a good picture....