23rd May 2019
Babouschka was shaking her head and scratching her ears all the time so she went to the vet today.
As expected, she had ear mites which should be killed with the Broadline drops which were applied last Monday but her ears were VERY dirty so they were cleaned thoroughly.
She also had her first vaccination and was micro chipped. 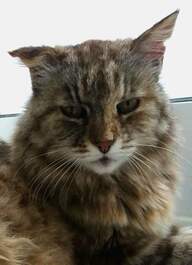 22nd May 2019
​​Gingerlou wasn't looking good last Saturday and Sunday. She didn't want to eat and we thought the end was near...
​But all of a sudden she started eating again and was walking around as if nothing happened!

Her feeder asked if we could take in another cat from the colony she's feeding as this (old) cat was always with Gingerlou and because she's always crossing the (busy) road she was afraid that she would be run over by a car soon.
I told her that we couldn't because we're full up but after some good talks we decided to take her in as it would be good for Gingerlou (she was depressed) and of course we always want to save a cat's life.

So... on Monday 20th May Babouschka came in..
For sure she was once a home cat who was dumped in this colony 4 years ago.
She's a lovely cat and it was good to see that Gingerlou was happy to see her! 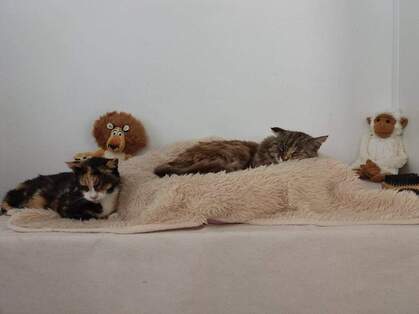 16th May 2019
The feeder of Gingerlou is visiting her every day and it's so lovely to see how happy she is to see her!
She was worried about her breathing and asked us if the vet could come to see her so Gingerlou was examined this afternoon.
For now she's stable and as long as she's eating well we'll try to keep her as happy as possible.
​We all know there's no way to cure her and that her situation can change every day.
​Fingers crossed.....

9th May 2019
Yesterday evening Gussy didn't look good; he was hiding and had breathing difficulties so we took him to the vet early this morning.
We took him already to the vet on the 13th April because we saw that something was wrong with him; all possible blood tests were done and everything came out good so we were so happy at that time but I always saw that something wasn't right. But when all blood tests came out good, what can you do???

We rushed him to the vet this morning, who was already waiting, and was immediately put on a drip and in the oxygen chamber. He was also put on a hot water bottle because his temperature was only 35 degrees.

The vet wanted to stabilize him before she could take an X-ray so after one hour we got the result: it looked like he had fluid between his lungs so they were going to take this out but he had to go on the drip and oxygen for another hour.

After that hour we were told that an ultrasound was taken and the fluid was not in his chest but in the lungs; one lung collapsed and the other lung was only working for 25%.
By that time his temperature dropped down to 32 degrees and he was in a coma.
There was no way so save him so I had to take the most difficult decision...

I love ALL our cats and maybe I shouldn't say this but Gussy was my MOST beloved cat; he always slept in my arms and was crying when I was going out, we had a very special bond and I'm heart broken... I don't think anyone can ever replace my Gussy...

Rest in peace my little darling. 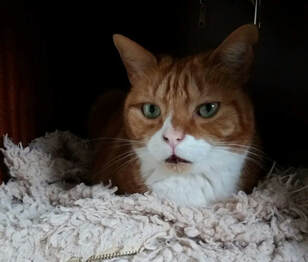 2nd May 2019
Gingerlou, a little (but old) female who has lived all her life in a colony looked like having problems so she was taken to the vet on the 29th April 2019.
She was kept on a drip for 4 days, blood tests were done and an X-ray was made.
Unfortunately the results were not that good... she had a lot of fluid in her chest, which was removed, and most probably has a tumor in her chest.
Of course we couldn't put her back in her colony so we took her in.
We know that she can't live long as the fluid in her chest will continue building up, although she has medicines; she could live only a few days but with a bit of luck also a few months.
We will monitor her and as soon as she has serious breathing problems we will have to put her to sleep but as long as she's eating and looking happy, we will give her a good time to let her enjoy her last day in life in a safe environment, for the first time in a warm and soft bed and with the very best food.
Let's hope and pray she'll be fine for a long time... 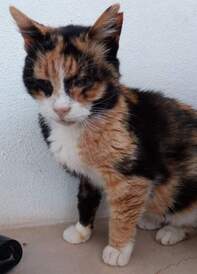