​27th October 2021
TIGGER had another dental today as we saw that she had problems in her mouth again (she already had 4 teeth extracted one year ago).
It was good that we took her as she had one broken tooth and at the back of her mouth the roots were showing so she must have been in real pain!
Another 4 teeth were extracted and the vet told us that she lost already a lot of teeth so she has only a few left now and can only eat soft food. 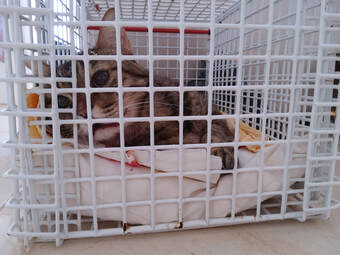 MONTY had a check up and an ultrasound showed that he didn't have any stones and his bladder was also good!
We're so happy for him as he had to stay isolated in a room for 10 days and he was so sad...
Finally he could go out in the garden again!

MUNCHIE also went for examination as he has a skin problem in his face; he already had antibiotics for 5 days but he didn't come any better.
Today he had a steroid injection and we have to put a cream on his face twice daily.
He had this kind of problem before and a steroid injection helped him at that time so we're keeping our fingers crossed...

​We're still catching and neutering in the colonies we feed.
This week these two were neutered and released back in their colony today.
​When they're neutered the vet makes a V-clip in their ear so we (and anybody else) know that they're neutered: a female gets a clip in the right ear (because a female is ALWAYS right! haha...) and a male in the left ear.

We took TOMMY to the vet for a good check up (when sedated).
In May 2021 he had problems eating and 7 teeth were extracted on 8th May 2021 but he was still screaming when he was eating so he was checked by the vet during a home visit on the 29th June 2021 but she couldn't see anything wrong with the gums or teeth; she said that maybe a tooth was pressing on the gums.
But he was still screaming every day so we wanted him to be checked under sedation and today 3 other teeth  were extracted and a bone was "sandpapered".
Hopefully this will finally solve his problems! 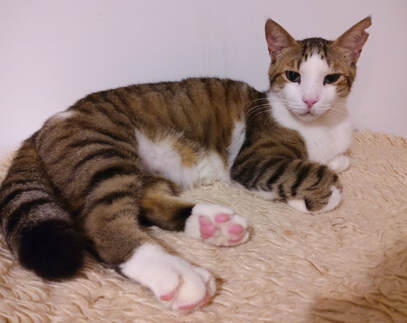 12th October 2021
Last Saturday, 9th October 2021, we took MONTY (from Mellieha Bay Hotel) to the vet as he had peeing problems.
At first he was put on drip and after a lot of tests, X-rays and ultra sounds, the vets found out that a big mucus plug was blocking his penis and the bladder was quite thickened.
He was sedated to give him a urinary catheter and of course he had to stay in the clinic for a few days.
Yesterday, 11th October 2021, they removed the catheter and were hoping that he would pee on his own soon.
Late last night we received the good news that he peed and that he could be discharged this morning.
He's in a room by himself now so we're able to give him medication for 10 days and we can monitor his peeing.
He's also on special food (dry and wet) and we can only hope that he won't have the same problem again....

BILLY-JOE was also taken to the vet as he needed a check up (so we had TWO vet runs today....)
He had an ultrasound and his condition improved a bit; he doesn't have liquid in the lungs anymore so we can stop one medicine. Of course this is always a risk so we have to monitor him closely. 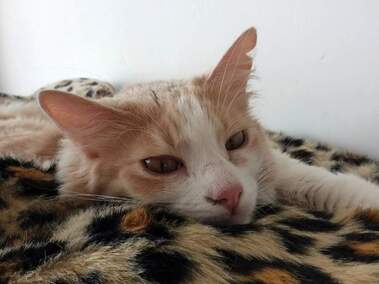 ​7th October 2021
TOYA went to the vet for a check up.
An X-ray was taken and the vet was happy with the result: the fracture has healed and callus formed!
We'll have to remain always cautious as it will remain a weak place and if she breaks her leg again most probably it'll have to be amputated...
That was the bad news as Toya is a VERY energetic kitten and just loves to run, jump and climb in the highest places!
She'll have growth support healthy bites which contain natural sources of calcium, glucosamine and is high in proteine.

This date will always be in our memory as one of the darkest days in our life...

This morning at 3.30 am Charlie (my husband) woke me up and told me: "There's something very wrong with Fuxa!"
When he was preparing food for all the cats, Fuxa fell from the window sill all of a sudden, was gasping for air and couldn't stand on his hind legs anymore.
We were holding him in our arms, trying to comfort him but he didn't come any better...
We have an oxygen chamber and we were doubting to put him in it but once we didn't know what was wrong with him we decided to rush him to APH (Animal Hospital) which is open 24/7.
Once it was in the middle of the night Charlie didn't' find any traffic so he was there in 20 minutes and the 3 vets who were on duty took him in immediately.
We had high hopes but after half an hour Charlie called me and said: "they couldn't save him".

I've talked to the vet who told me that most probably he had a heart attack, his lungs were already full with fluid.

My world fell apart.... my baby... my Fuxa who was always kissing, head butting and hugging...

Of course it's always sad when we loose one of our rescued cats but some are more precious, especially when I've bottle fed them from just born.
I can't believe that I won't see him anymore and it will take a long time to accept his suddenly demise. 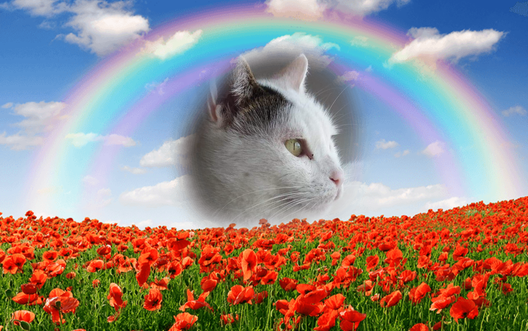