The fifth edition of the successful Classics under the Stars concert was held on the 20th June 2014 on the grounds
of the Inquisitor’s Palace at Girgenti.
The concert is organised by the Office of the Prime Minister and features the Malta Philharmonic Orchestra.
For the second consecutive year, the concert raised funds for animal sanctuaries and we were one of the nine NGO’s
who benefited.

Today we attended the Press Conference and received € 350, -- from Michelle Muscat (Prime Minister’s wife) and Sigmund Mifsud (Chairman of the Malta Philharmonic Orchestra).
Of course we are very happy with this donation because every little bit counts but isn't it a bit disappointing that the 1000 people who attended this gorgeous evening for FREE (!) donated just a bit more than € 3000,--?!
This shows that the Maltese people are not willing to donate for animals…
Mrs. Michelle Muscat told us that she received a lot of complaints about the fundraising for animals but she’s an animal lover and will do it next year again!

Unfortunately we don't have more pictures available because our camera was not working! :-(
Anyone willing to donate a good one????

Jack was caught in a colony we feed and was neutered.

Fuxa had a check-up. His nose and ears are so much better but one of his paws is still infected so he had another cortisone injection and will have antibiotics for a week. 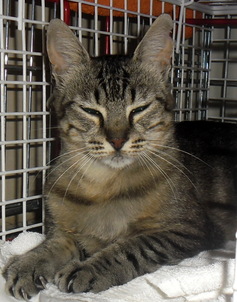 
Bebbuxa was caught in a colony a few weeks ago. Most probably she was dumped there because she’s very friendly. We didn’t have the heart to put her back, especially because there are some bad people in that area who are trying to poison the colony.

So we kept Bebbuxa here and are trying to find her a good home, which is not easy because she’s about one year old and people only want to adopt kittens.

She couldn't stay in a recovery cage so we moved her to our cat-garden where she was introduced to the other cats who are living there and she’s very happy!
Of course we are still trying to find her a home!

It has been a busy week with our kittens as they all had diarrhoea; especially Sophie had it very bad so every day was cleaning, cleaning and cleaning....
They all got special food, Sophie has been on medication for the last couple of days and at least now it's better!

From left to right: Andra, Odin, Lily and Sophie


A male and a female who were caught yesterday were neutered this morning.

Catching day in a new colony.
The big ginger male in the picture wasn't caught but his time will come....


Fuxa, Sophie and Lily went to the vet for a check up.
Fuxa's nose is much better, Lily is completely healthy, and Sophie's tail looks good although it's still not sure if it doesn't have to be amputated completely.
We'll continue treating her and will do our very best to save it!

Today our biggest fears came true as we got the news that the kitten we were trying to catch for more than three weeks was killed by a car.
So sad and words can't express how upset we are.


R.I.P. little angel, hopefully you are in a better world now, with friends to play with, people who love you, sleeping in a nice cosy bed, no hiding under cars, plenty of good food and no speeding cars.....
We've done our very best to save you but couldn't explain to you that we only wanted to reunite you with your mummy and your siblings.
You are in our prayers....

We received an email from a woman who told us that some kittens were in danger in Mosta because people were throwing stones at them.
So, while everybody was enjoying their Sunday at the beach or the pool, we headed to Mosta in the morning with a car packed with catching equipment.
After we finally found the address, we didn't find any kittens and after asking neighbours we finally met an elderly lady who told us that she was feeding the cats and kittens in that area. They were all in a quiet safe place (a big field) and the lady told us that there wasn't an alarming situation at all.....

Once we were out with all our catching equipment we decided to try to catch the remaining kitten in Mellieha (our working area) because he was left behind after we caught his mother and siblings two weeks ago, living in a (real) dangerous situation.
We've spent hours in the scorching sun, tried EVERYTHING we possibly could, but this kitten is so wary and (again) we didn't manage to catch him....
Late afternoon we came home empty handed, exhausted and sad.
Sunday was gone....

Two females were caught in their colonies and neutered.


One year ago Leo found his forever loving home.
Today we received an update; he's so happy!


Sophie, Lily and Fuxa went to the vet. 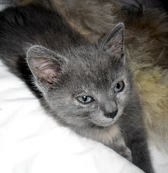 Sophie's tail looks very good although it will take some more weeks to be sure that she can keep her tail.
There's no infection any more so we can gradually stop the antibiotics but of course her tail has to be cleaned and medicated a few times a day.
We have very good hopes!

Lily's tummy looks very good and we don't have to worry about her any more!

We were very worried about Fuxa because he had spots on his nose and ears and because he's white, our biggest fear was that he had skin cancer...
According to the vet it doesn't look like cancer, especially because he has spots on 3 paws also; most probably it's a bacterial infection.
He had an antibiotics and steroid injection and antibiotics for one week.
Another check-up in a week's time.

We went to search for the last kitten (see 1st July 2014) so he could be reunited with his mummy and siblings but no sign of him.
So sad but we don't give up and will go back to try to find him.


Tiffany and Cleo were adopted together and went to their new loving home! 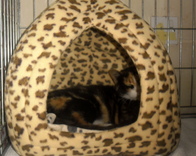 
A female in a colony was caught and taken to the vet because her skin looked bad.
She has an allergy and will get antibiotics for 10 days in our recovery.


Sophie and Lily went to the vet for a check-up.

Sophie’s tail looks good but still needs a lot of medical attention.
According to the vet (sweet dr Delphine @ Centru San Frangisk) there’s a good chance that we can save her tail but it will take about a month to be sure…


Lily is doing fine also, she still needs antibiotics and medicines for her tummy but for sure she’ll be fine in a week’s time!

We went to catch the mother cat with her three kittens again.
We managed to catch the mummy and two kittens and after hours in the scorching sun, we had to decide to leave one kitten there because it was impossible to catch him but we will go back for him as soon as possible....
The mummy and her two babies were re-located in a very safe place where they have shelter, food and are taken care of.

We also caught a black male who's in a very bad state so we'll take him to the vet for medical attention and neutering.

3rd July 2014
He was full of fleas and mites, had 3 broken teeth and is under nourished.
We'll keep him in our recovery for some days and he will be released when he's better.
He's a devil and was fighting all the time in his neighbourhood but hopefully he will calm down now, after being neutered.

Our kittens are doing well!
Tomorrow we will take Sophie and Lily again to the vet for a check up. Hopefully Sophie can keep her tail!