We were very worried about Pascua but until now she's doing well.
So far so good but this morning we had a big shock as we saw that Bona had a big lump on her tummy and the wound had opened a bit and was infected.
So we rushed to the vet who cleaned the wound and gave her an antibiotic injection but also found out that she as a hernia which has to be operated tomorrow.
She's in a recovery cage for now so she can't move around too much and most probably she has to stay in there for the coming days.
We need your prayers again!

Bona and Pascua were neutered today.
Unfortunately we were told that Pascua had a tumor on her uterus, very upsetting as she's so young but the vet told us that hopefully she managed to remove everything.
We have to keep an eye on her as it could be that she's bleeding inside.... VERY upsetting!
Please say a prayer and keep fingers crossed.
Thank you! 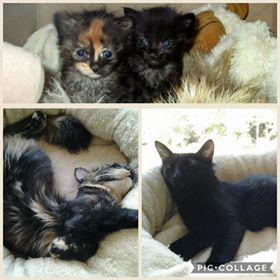 A blind kitten was brought in today, we named her Bailey.
We are very soft and didn't have the heart to put her in a cage in the sanctuary by herself so she's cozy in our living room and will be introduced slowly to the other cats when she's ready for it.
She's so happy in her warm bed and is purring and kneading all the time.

Sofia's babies are 7 weeks old and very naughty but adorable!
Here they just woke up... very lucky to take this picture :-) 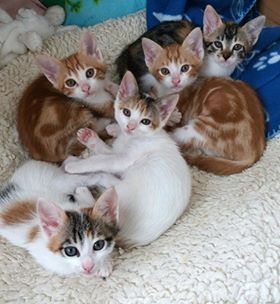