﻿Our vet bills are sky high so please, please donate!
Thank you so much!﻿ 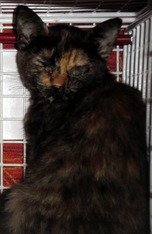 A kitten with very infected eyes was caught in a colony.

According to the vet one eye has to be removed but first the infection
has to clear up.

She had an antibiotic injection and she needs antibiotics for the coming weeks,
until the infection is gone.
She’ll stay in our recovery until she has recovered completely. 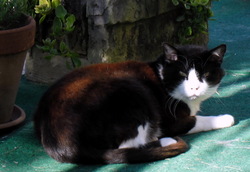 Tommy had blood coming out from his nose.


He has tumours in his mouth and had a steroid injection.
Hopefully this will help him!

Another busy afternoon for our home-vet. 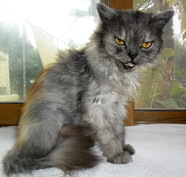 Alexia is doing very well but she’s drinking and peeing a lot.

The urine test showed that she has a (minor) blather infection so she’s on medication
for 5 days. 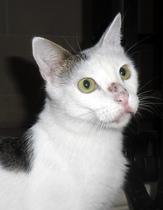 Fuxa, our “problem child”, has been limping for a week; most probably he jumped from a tree! According to the vet it’s a nerve problem so he’s on medication for the next 7 days.

His nose showed some spots again so he’s also on Intrafungol again for the next 7 days.

Katy has breathing problems so she’s on Ventolin syrup now.
Most probably for the rest of her life…

Franca used to be a beautiful cat (as seen in this picture) but these last month she got worse and worse and finally we managed to catch her today so the vet could see her.
Her kidneys were almost gone and she wouldn't have a quality of life so we had to make the most difficult decision... not to let her suffer we had to send her over the Rainbow Bridge...

ODIN & ANDRA went to their forever loving home in The Netherlands

On the 19th June 2014 Odin & Andra were rescued from a very filthy and dangerous colony in Mellieha; they both had cat flu and their eyes were infected.
After a lot of TLC they became two beautiful lovely kittens and today they had a very exciting day as they went on a flight to their new parents in The Netherlands!
BEFORE: they were living here....

After a few weeks 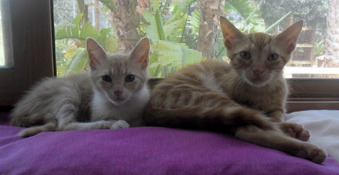 And after a few months they went to their forever loving home in The Netherlands!
After: in their new home!
Their new mummy 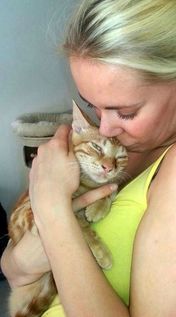 Another very busy afternoon for our home-vet.

Bebbuxa, Odin, Andra, Lily and Sophie had their 2nd vaccination.

Odin and Andra are ready to go to their lovely home in The Netherlands on Monday 15th September 2014!

Milo had his 1st vaccination and was dewormed with a Drontal injection.

Alexia had a check-up. The ulcer in her mouth is still there –although much better- so we put her on Loxicom again for a few days.

Fuxa’s nose and ears are completely clear from the fungal infection but he still has a severe infection in his front paw so he had two injections and will have antibiotics for the coming week.

Candy had a good check-up because she didn't look well these last days.
We don’t know how old she is because she was rescued 4 years ago and her age was unknown.
According to the vet her kidneys are very small and she has gingivitis.
She had a steroid injection which will last for about 6 weeks. After that time she will have a good check-up again.

When we were checking the cats, we saw all of a sudden a “bloody spot” in Bo’s neck. She has a Hot Spot and will have antibiotics and cleaning with Saline and Betadine.

Our lovely vet, Victoria Bondin, came for another home-visit.