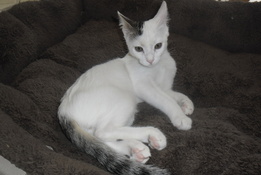 Fuxa was taken to the vet for a check-up.
His paws are still not completely healed and although there's no infection anymore he has to stay inside for a couple of more days.... 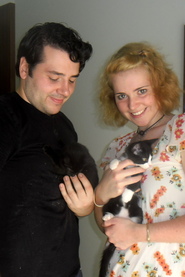 Bibi and Balou were adopted by the most wonderful mummy and daddy: Sinead and Saul.

We had to say goodbye with pain in our heart but once they found such a good home, we're happy and it makes our work worthwile!

9th September 2013
We are really paranoid about Bro's leg and are checking again and again...
We thought his leg felt very hot so we took him to the vet for a check-up but were assured that everything is fine.

Bro decided not to wait till tomorrow and took of the bandage himself!
Everything looks fine but we are a bit paranoid and are checking his leg over and over again....
We are so proud of him! He's such a brave boy!
He had a whole year of trouble and pain but hopefully now everything is over....

We have been waiting soooo long for this day!
It’s almost a year ago (11th October 2012) that Bro was found in a field in Qormi with a very infected leg.
He has been in plaster for 8 weeks. Today X-rays were taken again and everything seemed to be good enough to take of the plaster.
His leg is still bandaged (for protection) but this will be taken off by the end of the week.
For now: HAPPY ENDING!!!