Lucy was discharged from the Animal Hospital on Saturday 18 April 2015.
She’s still skin and bones but recovering very well!
On Wednesday 22nd April she had a check-up and the vet (and we!) couldn’t be more happy!
Although she always lived in the streets, she’s extremely friendly and we don’t have the heart to put her back in the streets after her full recovery (which will take at least a month) so we’re trying to find her a very good home.
If you can give her a forever home, please contact us!
We've asked already to sponsor her but until now we didn't receive any donations; please let us continue our work and help us!
Please click here for info how to donate. Thank you! 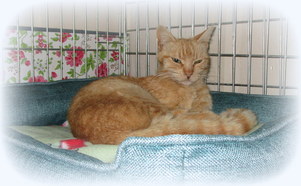 Four Thirty was operated on Wednesday 22nd April and almost all his teeth were removed.
He was very dirty so our lovely vet gave him also a good bath!
He’s still in our recovery (on antibiotics) but hopefully he can be released in a couple of days. He’s always around the house so he’s not living in the streets and will always have soft food available and will be cared for.

Copper Dewdrop started eating by himself on Sunday 19th April but still loves his bottles a couple of times a day.
He’s also using the litter box so he’s becoming a BIG boy! 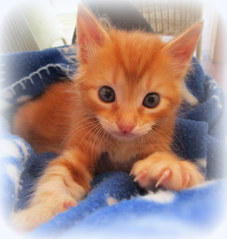 Because we've been so busy, the update has been a bit neglected. We're very sorry about this, we hope you'll understand that this doesn't mean that nothing happened...
We'll try to make it up here and will mention the most important issues in a glance. 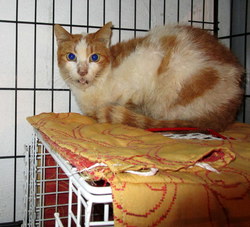 came to eat here for the first time somewhere last year and never left...
He always looked bad, drooling and spitting. We never managed to catch him, until yesterday so she went to the vet today.
He has an infected mouth with blisters and will have antibiotics for one week.
Next week he will have a "dental"; most probably all his teeth have to be removed. 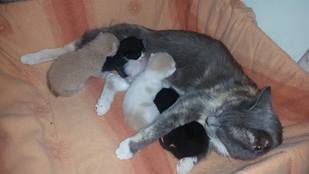 
was rescued, heavily pregnant, from Gozo.
She had her kittens, safe and cosy indoors, and her kittens all found a very good home.
Emilia came already on heat again so she was neutered today.

Lucy was caught in her colony because she looked very sick and didn't eat.
She was very dehydrated and had ulcers in her mouth; the vet advised us to to leave her in the Animal Hospital on a drip and under a heating lamp because her temperature was very low.
She's still there and hopefully tomorrow she'll be strong enough to extract all her teeth as, according to the vet, this is the only way for her to survive.
The bill came already to € 170,-- (for the first 3 days in the Animal Hospital!) and will exceed € 400,--!
Please let us know if you would like to sponsor her! acmalta@go.net.mt
At the Animal Hospital: Centru San Frangisk 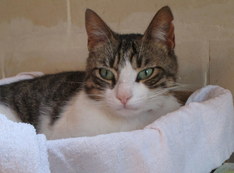 Our "problem child" had an abcess in his neck which bursted.
We kept him on antibiotics in the recovery (again) for 5 days. 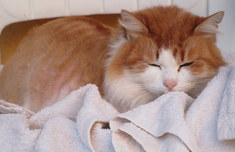 was taken to the vet to be shaved completely.
She was very matted but we couldn't catch her before.
She's very happy now!

Wasn't feeling well so we took him to the vet.
He was constipated and got a vitamin injection and a pain killer.
We gave him paraffin oil for 5 days and after that he was ok.

Copper Dewdrop is doing very well!
His weight today is 477 grams, which is quite a lot for a 3.5 weeks old kitten, so he's a cute, chubby baby!﻿