We've reached the bottom of our funds!
Please consider to donate!
Thank you!

30th August 2019
Weasley came into our care today.
He's one of the cats who are living at Mellieha Bay Hotel which will be demolished by the end of October 2019 and all the cats who are living there are in need of a new home.
They were always very good taken care of by Lee and Paul of Aquaventura (diving center at Mellieha Bay Hotel) and they are devastated.
Weasley is a lucky boy as he's adopted in the UK by Jane Breeden (a frequent visitor of Mellieha Bay Hotel) and arrangements for his journey to the UK had to be made.
Unfortunately Air Malta isn't taking pets to the UK anymore so she arranged to bring him over land with Animal Couriers.
We were asked to take care of Weasley until he's leaving so we prepared a nice room for him where he will be pampered until he will leave.
He's a very sweet gorgeous boy and we already fell in love with him!

22nd August 2019
Sam went to the vet today.
He had a wound behind his right ear and we suspected ear mites but Sam isn't very friendly (understatement!) so we couldn't do anything.
It was a BIG job to catch him today but after a lot of stress (us!) he was safely in a carrier.
The vet had to sedate him to examine him and we were right: he had ear mites and also a lot of wax in his ear so he had a good clean up, Stronghold (which kills the ear mites) and a steroid injection.
He had a good check up and for the rest he's healthy.

He's 10 years old and is one of our most expensive cats as he had a very costly operation in 2015; he used to live in the streets and one day we found him limping. He was hit by a car and his hip was dislocated. He needed an operation which costed us 600 Euro but it was all worth it as after 4 weeks recovery he walked again as if nothing happened!

When we moved to our new location in 2016 we caught him and took him into our sanctuary where he's living happily. 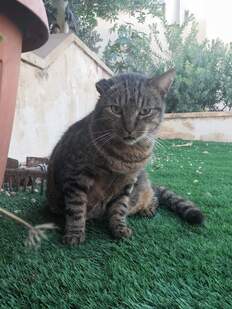 7th August 2019
We took Guapo to the the vet as since last Sunday his 3rd eyelids were showing and he didn't feel well and his ears were very hot.
These things always happen on a Sunday or on a Public Holiday, when no vet is available, so we gave gave him Loxicom (to put the fever down) and dewormed him (as this is a common problem when the 3rd eyelids are showing) but unfortunately things remained the same until today.
The vet examined him and her conclusion was that there wasn't anything really wrong with him but most probably he had a heat stroke.
Not that strange as it's VERY hot here and Guapo likes to go outside in the garden; the more we try to keep him inside, the more he wants to go outside...
He had a vitamin injection and for now we just have to make sure that he stays inside and keep him as cool as possible. 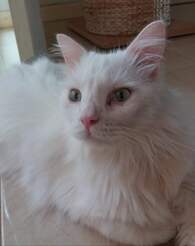