Four Thirty is one of our outdoor cats who came here one day... who knows from where...
Of course he was neutered and when the vet told us that he had problems with his teeth we gave him a dental and several teeth were extracted; after that he was very happy and always stayed here.
Yesterday we saw that he wasn't well so we put him in our recovery but unfortunately he crossed the Rainbow Bridge before we had the chance to take him to the vet.
We are chocked because this happened all of a sudden....
R.I.P. dear Four Thirty.

Apologies for limited news feed but we're very busy moving house and don't have much time to spend on the computer.

Of course we're taking very good care of all the cats in the mean time and we can tell you that Ninu is doing very well. At first we couldn't believe that he was so quiet but after a few days we found out the reason: he had cat flu!
We medicated him and at this time he's the most lively playful kitten you can imagine! He's gorgeous! 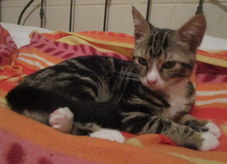