28th June 2017
The kitten who was brought in yesterday was diagnosed with ringworm, as we expected.
It's a big problem in an environment with a lot of cats, as it's very contagious, but we'll keep her separated for a couple of weeks and hopefully she'll be ok by that time.

27th June 2017
A beautiful kitten was brought in today.
She was found in a colony where she was most probably dumped. She was very scared and the other cats didn't let her eat so we couldn't leave her there.
Tomorrow she'll go the vet for a check up. 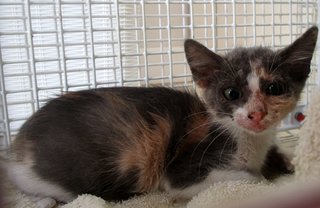 We're blessed that all our cats are doing very well.

Our only problem children are Fuxa and Munchy who both have a severe skin problem.
We took them to the vets several times and it looks like nobody knows what's the problem; they were given steroid injections all the time (a fast and easy temporary solution) and we were not happy with that as it will give them kidney/liver problems in future.
Today we took them to another vet for a second (third/fourth!) opinion and this (very experienced) vet thinks it's a psychological problem; besides antibiotics she prescribed a natural treatment.
Let's hope this will work!

The kittens are very happy and growing fast.

2nd June 2017
Molly and Mimi were brought here as their owners are moving to Germany.
It was a very difficult decision as it was never meant to leave them here; their flight to Germany was already booked for the 5th June and they had all their vaccinations and passports but the owners only wanted the very best for them.
Molly and Mimi were never "home cats" but lived in the garden and came in the house only now and then.
Moving to Germany would mean that they would be outside in the VERY cold winters (-20 degrees C), a climate that they're not used to as they're used to the warm Maltese summers and mild winters.
After a lot of talking (and crying) we've decided all together that it would be better for Molly and Mimi to stay here in our safe garden.
We're keeping them inside for a couple of days and after they'll go out to enjoy our cat garden.

1st June 2017
A Japanese film crew came to film our sanctuary. It was a great experience!
We will be on the Japanese television on the 22nd July 2017 and after that we'll receive the film.
Thanks to the crew! Amazing people, very professional and very friendly!
Can't wait to see the result!