Phoebe wasn’t looking good these last weeks and one of his eyes became blurred.
He has an ulcer on his eye and his eye should be closed for a while but because he’s having difficulties breathing (because of an infection) the vet couldn’t give him anaesthetics.
He had an antibiotic injection and has antibiotics, eye drops and eye cream for 10 days and if he’s better by this time we have to do a blood test to see if he’s fit enough to have anaesthetics as he’s quite old (he’s at least 15 years old but he could be much older as he wasn’t a kitten when he came to eat for the first time -15 years ago-). 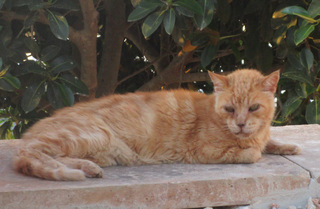 ​Nina, Liam and Dean and Faye had their vaccinations.

Our baby opened her eyes and ears this week. 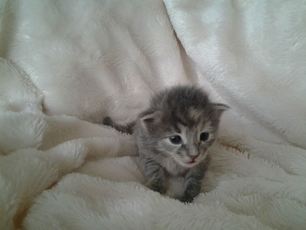 We're very happy to tell you that our baby is doing very well!
It's not that easy to raise a new born kitten, it's a lot of work, a lot of worries and a lot of sleepless nights but gives us also a lot of happiness!
It's too early to say that she will make it but for now everything is fine.
6 September 2016

4 September 2016
On Sunday morning a new born kitten was found on a pavement in Mellieha and we took her in (we think it's a female but difficult to tell for now).