Tribal Mark, the "baby-machine" in one of our colonies, was finally caught and neutered.
We've been trying to catch her for 2.5 years and today was our lucky day!
Her uterus looked very bad (due to her many pregnancies) and had to be removed.
The kitten under here (Mickey) is one of her latest babies.... she abandoned him because he wasn't healthy....

A kitten with very infected eyes was caught in a colony this morning and we took him to the vet.
One of his eyes bursted and is lost; the other eye is very bad but we’re gonna do our VERY best to save it....
This morning he was very upset but he’s cosy in the “baby-room” now, with a hot-water-bottle and
a sleep-sheep (with heart beat) and he seems to have settled.
The hard work for us begins now …. please say a prayer for this little angel….

The neutered boys had two days recovery and were released in their colony today. 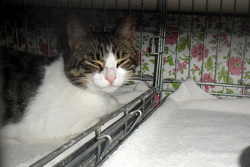 A little sweet boy was caught in his colony and neutered.
He's living in a very dangerous place (crossing roads all the time) so we'll keep him in the recovery-cage for a week and then we'll see if he'll be accepted in our colony, where he will be safe...
Fingers crossed! 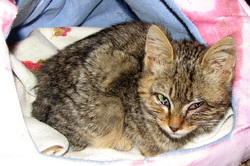 A small kitten was caught in his colony because he had signs of cat flu.
His feeder is medicating and fostering him and hopefully he will recover soon!