A mummy cat and her two kittens were unwanted in a yard in Mellieha so we went to catch them.
It's a very difficult place to catch, very hard to enter, but today we managed to catch one kitten and the mummy.
The kitten has eye problems which we are treating and the mummy is very feral, not happy at all to be closed, but hopefully she'll settle.
The other kitten is very difficult to catch as he's hiding but tomorrow we'll go again an hopefully we'll manage!

The fourth kitten was caught!
Still one to go.... 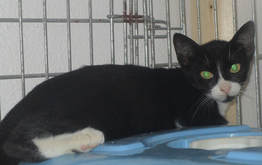 A few days ago one of our feeders was threatened by an English woman who told her that she would poison or dump the 5 kittens and 2 mummies she was feeding near her house.
Today 3 kittens were caught and are safe in our recovery; unfortunately the other 2 kittens and mummies ran away but in the coming days we will try to catch them also so all of them will be safe. 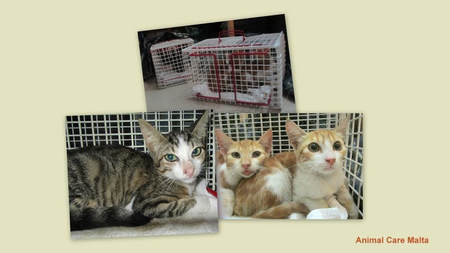 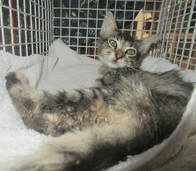 Last night a small kitten was found under a car in Ghadira, Mellieha.
She seemed to be in a bad state so she was taken to the vet and came back in at 1 am.
The vet on duty told us that she had a wound under her tail, gave her an antibiotics injection and a strip of antibiotics which we should give her from the 11th August.
We gave her a cosy bed and she started purring straight away, as if she wanted to tell us: "I never had a bed like this".
Although the vet told us that she only had a wound under her tail, we knew that something was VERY wrong with her as she was skin and bones and VERY dehydrated; unfortunately when you have to go in the middle of the night to a vet, the vets on duty are not experienced at all, they are all young and don't know what we know about stray cats.
As this kitten couldn't even stand on her legs and didn't eat or drink anything at all, we started force feeding her every 3 hours with a syringe and of course we gave her as much water as possible.
The first day we thought to see some improvement but his was most probably "wishful thinking".
The second day she did some pooh, what wasn't pooh, the Royal Canin kitten food was coming out the same and at that time we knew that her intestines weren't working anymore.... she had been too long without food and water and her insides gave up.
On Friday morning, 11th August, she passed away at 5 am, so very very sad.
At least she died in loving arms and not under a car by herself but we'll never get used to this.
RIP dear Kizzy, we did everything to save you but it was too late......

We have a very difficult (unpaid) job.
Please consider to sponsor us! 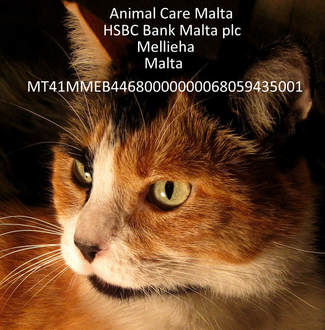 8th August 2017
Our kittens had their vaccinations today.