We have exciting fundraising news!

By signing up and shopping online via RedHeartShop you will generate a free cash donation for us.
With over 185 of your favourite retailers, including Ebay, Sportsdirect, BookDepository, opodo, THEHUT.com and Expedia your are bound to find what you need and generate a donation.

To start raising free donations go to http:>//RedHeartShop.com/register and join - it's that easy!

Thanks for your support! 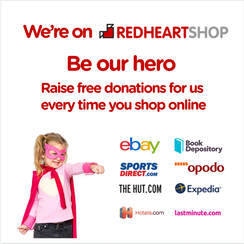 Sofia was stable today but the vets didn't manage to take another X-ray as she wasn't friendly with them anymore (what in fact is a good sign...).
Of course she can't be sedated in her condition and they didn't want to stress her out as this might do more harm than good.
She's still in hospital on medication and hopefully she'll be better day by day. 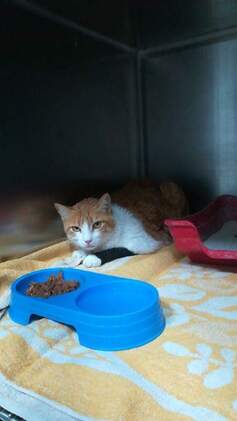 in the 5 star hospital

Sofia was better this morning but the X-ray wasn't looking good.
She had air outside of the lungs and the lungs are partially collapsed. So upsetting...
She's stable and not on oxygen anymore but it looked like she had a blunt trauma, like a fall or something falling on her, but this is impossible as she's always safe in our back yard and in the adjacent bed(cat)room.
The other possibility (according to the vet) is that there's an abscess that is leaking air into the surrounding area.
At least she was breathing fine without oxygen today so we're keeping our fingers crossed.
Tomorrow she'll have another X-ray and we'll see from there.

This morning we saw that Sofia wasn't well. She was breathing badly and her fur was in a bad state.
These things always happen on a Sunday but when I contacted our vet she told me that she would open the clinic for us; the VERY best vet! (Pets and Vets Veterinary Clinic in Naxxar).
So Charlie (my husband) went and Sofia was examined. She had an antibiotic and steroid injection and was put on the drip after. So she's still in hospital.
Hopefully we will have better news tomorrow. 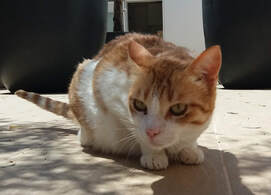 Finally the male cat with injured tail was caught and taken to the vet.
Unfortunately his tail was in a very bad state, already coming black and a piece was missing...
​So the only option was to amputate his tail and of course he was neutered also.

picture was sent by the feeder

We were asked by a feeder to help a cat with an injured tail. The feeder didn't know how to catch him so Carole (our one and only other member) went to catch him but unfortunately he didn't show up.
We already had an appointment at the vet (for neutering and injured tail) so not to cancel the appointment she caught another little female who was living in the same field and she was neutered.

Another vet day.
​
Munchie had a skin irritation on his face which was most probably caused by scratching his face because his gums are very infected (again...)
​He had a steroid injection and will have antibiotics for the coming 10 days.

Tigger had a bad smell from her mouth so we expected some bad teeth.
She had a dental and 4 teeth were removed. 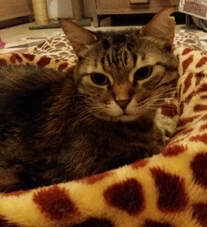 As most of you know, we don't only take care of the 85 cats in our sanctuary but we're also feeding more than 125 stray cats in colonies.
A few days ago we saw that Suki didn't eat well so we caught her yesterday morning and kept her in a cage overnight.
This morning we took her to the vet (as an emergency) and we were taken in straight away but when the vet was examining her, she passed away on the table...
They did CPR but unfortunately to no avail. So sad......
​Fly high little sweet angel. 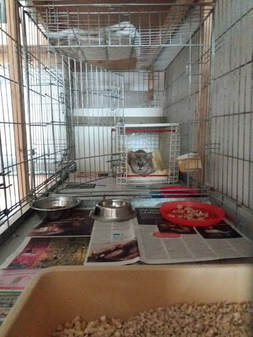 Yesterday morning we had a big shock when we saw that Fuxa wasn't breathing well so we rushed him to the vet where he was put on oxygen straight away.
Later a blood test was done and all results were good so an X-ray was taken and this showed that he had a blood clot in his lung.
Of course he had to stay in the hospital, which was very very hard for us as we know how sensitive and afraid he is (so a lot of tears were flowing...)
He was taken off the oxygen late afternoon but late evening he started losing liquid from his nose which could mean that liquid started accumulating in the lungs. He was given a diuretic and his breathing improved after that; he seemed to be stable but of course we had a terrible night.
Today at 5 pm we got a phone call that everything was fine and that he could go home.
Of course we have to keep a close eye on him. 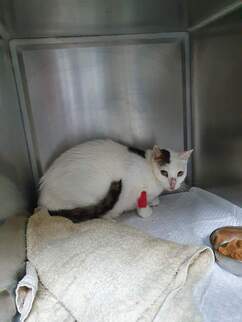 9th June 2020
Last week our vet wasn't doing any surgeries so we had to postpone some visits to this week.
Due to COVID-19 vet visits are limited to appointments only, no walk-ins, so we decided to take 3 cats today.
​They all really needed it!

Lola is 15th years old and has limited eye sight due to a severe cat flue when she was a kitten.
She's the sweetest girl you can imagine and never had any problems but a few weeks ago we saw that she was developing something on her nose and we suspected nose cancer which, unfortunately, was confirmed by the vet today.
There's not much one can do about it but she had a steroid injection which hopefully will help to slow down the cancer. 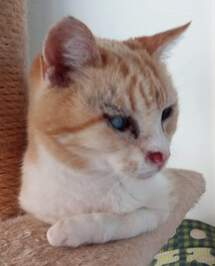 Fuxa is our "trouble child".
Every year when the temperatures are rising he's loosing fur on his nose and back legs and this time even on his side belly.
If this isn't treated, it comes infected and is even more difficult to cure (sometimes he needs antibiotics) so as it just started last week, he HAD to go to the vet as soon as possible.
Unfortunately the only way to control it is a steroid injection. We're not happy with this but it helps for a few months... 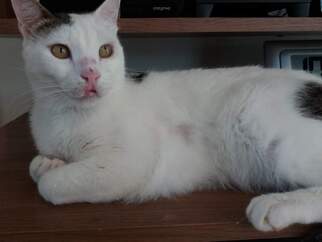 Panther was brought to us in 2011, together with his sister Kelly (who had a dental 2 weeks ago) when they were about 3 months old.
They both had severe eye problems but Panther was the worst. His 3rd eyelid was stuck and he was operated in both eyes (in 2011) but unfortunately he lost almost all of his eyesight.
We saw that he had difficulties in eating lately so we suspected teeth problems and booked him for a dental.
His teeth were very bad and 8 teeth were extracted today!
​ 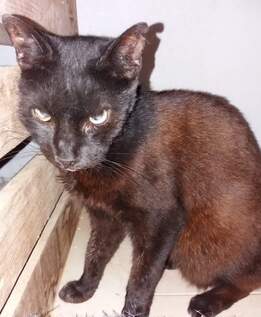