We've made donating easier!
Just click the button to donate via PayPal or Credit card.

Bella went to the vet for a dental.
This was quite a difficult decision because she's 12 years old and she's epileptic but I was sure she needed it and didn't want her to be in pain.
It was needed for sure! Five teeth were extracted! She had already teeth missing so now she's left with two teeth only.
Because of her age and being epileptic, the vet couldn't give her the normal anesthetics so she was given a light sedation and during the operation she was kept on gas.
Because of this, it took quite long to come to her senses but she woke up ok.
The vet advised to keep her in a small space for the first days so we set up a cage inside our house to be able to monitor her; the vet was afraid she wouldn't eat the coming days but at this time (11 pm) she already 4 small portions of baby food! (Plasmon).
She looks fine and we will try to keep her inside; we've tried this before but she really wanted to go outside (in the garden).
Hopefully after being a few days inside in the cage, she will decide that it's better inside! 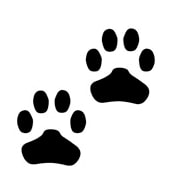 Our babies are growing!
They are very naughty (how kittens should be) and are running and playing in the yard during the day and in the evening they're going to sleep in the kitten room.
It's always amazing to see how different the characters of siblings are developing!
Max was always the most adventurous and still is the most naughty boy, Luca follows his brother but is more shy and Lana is a real girl: she's the most quiet and likes to be lifted and cuddled like a baby.

Sophia and her girls are also doing very well.
Her two boys were adopted by a Dutch man who was living in Malta but they've moved to the Netherlands a few weeks ago and are doing very well (pictures will follow).

1st August 2018
Zebbelina and Fuxa went to the vet.

Zebbelina had a bad breath and her gums were very red so I booked a dental for her which was very much needed as almost all her teeth were extracted, she has only two teeth left now.... 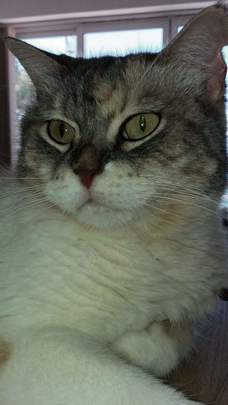 Zebbelina
Fuxa had the same problems as always in spring/summer: his lips are swollen and he has some spots on his nose.
Usually he also looses the fur on his back legs but fortunately this didn't happen this year (yet?); most probably because I'm giving him l-Lysene these last months, which boosts the immune system.
He got a steroid injection which (unfortunately) seems to be the only way to cure him. 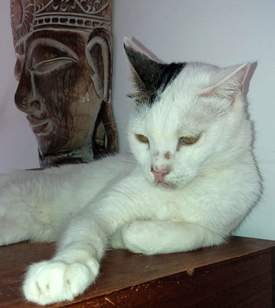 Our food and vet bills are SKY HIGH!
We depend on YOUR kind donations so PLEASE donate! 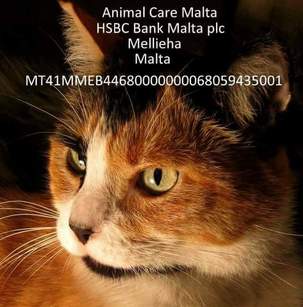