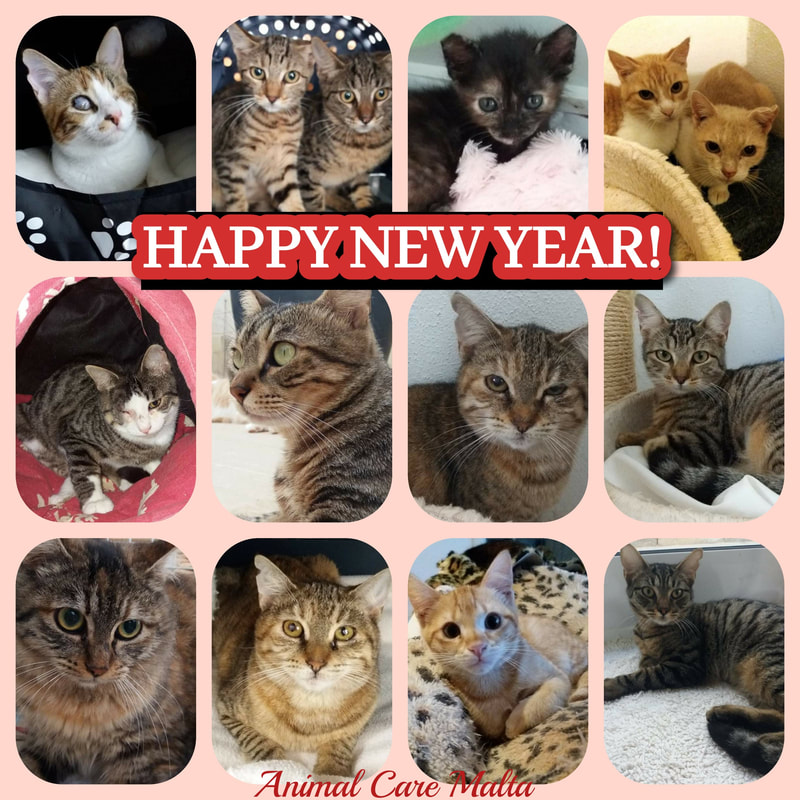 The cats in this card are our latest rescues.
​
From top to bottom from left to right:

Maggie:
​was found with very infected eyes in a colony at Paradise Bay Hotel.
The persons who found her did their best to heal her but didn't have much experience with infected eyes and she was kept in a cage in a dark room for 2.5 months...
When we found out we offered immediately to take her in and the next day she was taken to the vet.
Unfortunately one eye had to be removed and she lost sight in her other eye so she's completely blind.

Sanchez and Perla:
caught in one of our colonies.

Bambi:
found abandoned in a garden when she was 1-2 days old.
I've bottle fed her and she became a beautiful very naughty girl!

Mona and Lisa:
their owner, an old lady, had to go to an old people's home and they would be homeless.
We were asked by Animal Welfare to take them in, which we did.
​Obviously they weren't taken care of as they had lot of issues: ear infections and ear mites, dermatitis, diarrhea...

Frankie:
caught in one of our colonies with a bad eye which was removed because of glaucoma.

Stella:
caught in one of our colonies.

Bonita:
​​caught in one of our colonies.
She had one bad eye and our vet removed eye adherence.

Sylvia:
caught in one of our colonies.

​Eva:
​caught in one of our colonies.

Perla:
caught in one of our colonies.
​
Ben:
Found in a car engine in Mellieha and was brought here.

Sanchez:
​caught in one of our colonies.

4 cats were taken to the vet:
KOLA had a check up.
Everything looks fine but there's still a little bit open so she has to continue wearing the collar for one week.
At least she doesn't need any more antibiotics. 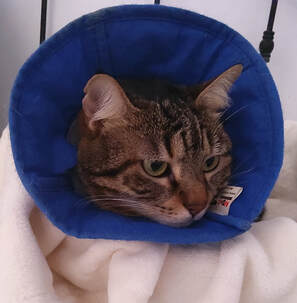 We saw that PINKY wasn't very well. She didn't eat much, was drooling and looked sad.
We expected that something was wrong with her teeth so she was examined again.
We were right as she already lost a lot of teeth and has some bad teeth at the back.
She's on antibiotics for 7 days and after that she'll have a dental. 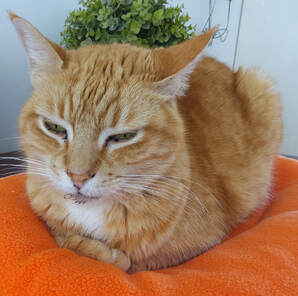 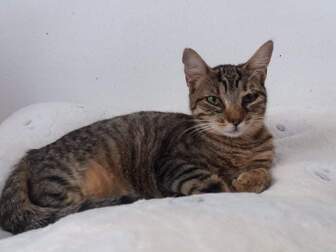 SANCHEZ started sneezing and coughing a few days after his sister Stella so we started also with antibiotics, painkiller and vitamins.
The vet confirmed that we have to continue with this for 7 days also. 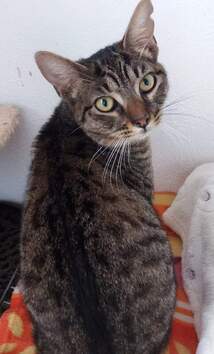 We hardly mention it anymore (as it's so normal for us) but we're still catching and neutering 2 cats in colonies every week and of course we're keeping them in our recovery until they are completely recovered.

Everybody was looking for some sun today 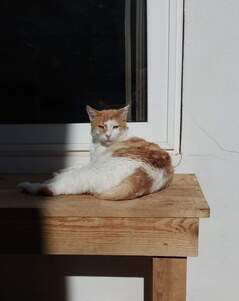 KOLA went to the vet where her stitches were removed.
It looked quite good but as she still managed to cut 1-2 stitches, she'll be on antibiotics for another week and she has to keep on her collar.
PINKY went also to the vet as she was lifting her left front leg these last days and I found out that she had an ingrown nail.
The nail was cut and although she's a little bit sore at the moment, she'll feel better soon for sure! 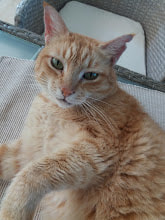 KIKKA started eating very good last Saturday (home made chicken and rice) so we've let her out of the recovery cage as she was very depressed after 2 weeks.
Let's hope she'll continue eating normal (good!) food...

KOLA came back home as she was going crazy at the vet with the (plastic) collar on...
I already prepared a body suit for her as the most important now is that she doesn't cut her stitches; I had the body suit already but it was without sleeves so I've been a bit creative and sew a sleeve on it.
It looked soooo good! Even the vet was very happy with it but unfortunately she took it off straight away!
So we had to invent something else.
First we tried a soft inflatable collar... which she took off also within 5 minutes....
Our last resort was another soft collar and THANK GOD she's keeping this on!
We fold it backwards when we feed her and she seems quite ok with this!

KIKKA also came back home but she has to stay in a recovery cage until shel'll be eating normal.

KOLA was finally operated as the infection was gone.
It was a very difficult surgery but we had all trust in our vet Dr Victoria Bondin.
She "folded" the skin and made stitches all around it. 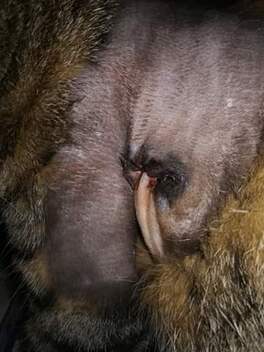 Kikka didn't eat anything since she came back home so we took her to the vet again.
She's very difficult to handle as she's very feral/wild but our vet managed to examine her and she had another ulcer in her mouth, no wonder she didn't eat!
She had to stay in the clinic again as they can give her antibiotic injections. 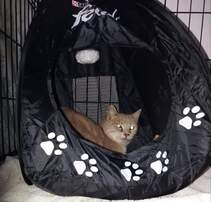