A female was caught and neutered.

Alexia was found abandoned on the 22nd August 2014.
She was skin and bones and in a very bad state; she couldn't eat so we fed her with a syringe until she started eating again and after a couple of weeks she gained some weight.
In the mean time she was treated for a lot of problems: she had cat flu, a blather infection, an ulcer on her tongue and a blood test showed that she had serious kidney failure.
It was obvious that she couldn't be homed so we welcomed her in our cat-household and gave her the happiest life possible.
Unfortunately a couple of days ago she deteriorated very quickly; she didn't want to eat anymore and it was obvious that she was feeling sick and sad so we took her to the vet today.
After a long talk we had to make the most difficult decision: not to let her suffer more we had to send her over the Rainbow Bridge…
R.I.P. Alexia. 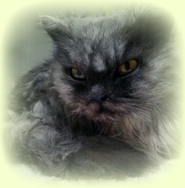 Malta Cat Club had a cat show this weekend in the Corinthia Hotel in Attard and we were invited to be present for some fundraising. The entrance was for free but visitors were asked at the entrance to donate something for us and Tomasina Sanctuary. There were also collection boxes where people could donate cat food.

We are very grateful to the Malta Cat Club that they’re not only caring about their beauties but also about the stray cats!
Thank you so much Malta Cat Club!

NINA found the very best home she could ever imagine…. but…

Before she was adopted (last Sunday) we took her to the vet for a blood test because she was drinking and peeing a lot and we suspected that she was having kidney failure.
On Tuesday we received the results and it wasn't surprising that she had serious kidney problems.
According to the vet who operated her (removal of a big tumour) she didn't have this problem before so it has to be caused by the anaesthetics, which has been too much for her body…

Before we took her to her new home, we already discussed the situation with the family who was going to adopt her and agreed that we would wait and see what the blood test results would tell us.
They were still willing to keep her but being a (lovely!) family with three small children we didn't want to put this burden on them; according to the vet Nina only has 1-2 years to live and it would be too upsetting for the children. Besides this, they’re going back to the UK in one year and Nina wouldn't be fit to travel…

So, in the best interest of everyone, we took Nina back. She will stay with us forever and we will do everything to give her the happiest life possible.
The family who adopted her gave us a generous donation to cover all her medical expenses. 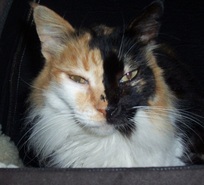 CHICA was born in April 2008 in one of our neighbour’s garden and as soon as she could eat on her own her mother used to bring her here.
She was already blind and we’ve always tried to keep her inside but never managed as he was used to living outside and running around.
It was amazing to see her playing and climbing trees –without seeing anything- and she knew every little corner…
She always stayed around and these last years we always closed her inside in the evening so at least she’s safe during the night but she’s not really happy with that as she loves her freedom.

A few days ago we saw her sneezing and snivelling so we decided to catch her as she really needed medication and yesterday morning we managed, after a lot of bites and scratches…
We’ve put her on antibiotics and anti-inflammatory and she’s already a lot better; let’s hope she’ll recover completely and as soon as she’s healthy again we’ll try to keep her in our cat garden so she’ll be safe forever!

NINA went to her forever loving home today!
After living in the streets for 5 years and surviving cancer she must think she arrived in heaven!
Her new name is Athena (rhymes with Nina) -goddess of war-; a good name for her as she’s a fighter! 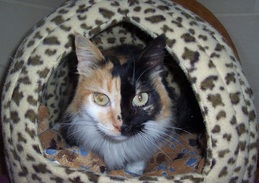 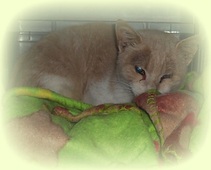 
Johnny was taken to the vet today because he was very sick. He was caught in a colony in November 2014 with a very bad cat flu but recovered well. Because he already lost one of his eyes and didn't see much from his other eye we decided to keep him here and he was very happy; he was playing a lot with the other cats and enjoyed laying in the sun.
But a few days ago, all of a sudden, we saw that he was going backwards again as he wasn't eating and it seemed that he didn't see nor hear anything.
When we took him to the vet this morning our biggest fear came truth: he was in a very bad state. His temperature was only 34 C, which means that his body already gave up, and after a long talk with our lovely vet we had to decide that there was no hope for him.
Another very sad day. We try to save them all but unfortunately sometimes we have to let them go....
R.I.P. lovely Johnny xx

We took Rudi also to the vet as he was coughing these last days. Not too bad but it was obvious that something was wrong.
He has a throat infection and got a cortisone injection and antibiotics. He will be on antibiotics for the next 7 days and hopefully he will feel better after a couple of days.

We took Woody to the vet tonight. He was coughing these last days so we already kept him in the recovery and were giving him antibiotics but he didn't seem to come better so we were very worried.
He has an infection in the throat and fever (39.5).
He had a vitamin injection and a pain killer/anti  inflammatory injection and he'll have antibiotics and painkillers
for the coming days.