PLEASE PLEASE consider to donate as COVID-19 hit us hard and we really reached the bottom....

ROGER is still not ok. Two week ago 7 teeth were removed and 4 of them were canines... the worst.
I've contacted the vet and was told to give him a course of antibiotics for 7 days, which in my opinion should have been done after his dental.
He wasn't eating anything but at least these last days he eats Princess Premium Zest when it's mixed with kitten milk so we're hoping that he'll be better soon. 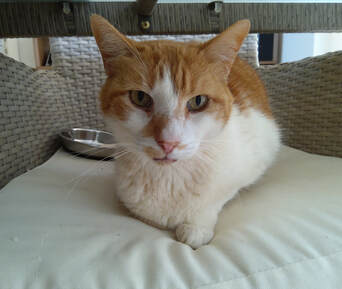 We're receiving all kind of emails and messages every day and some of them make our blood boil!
Today we were told (by a horrible woman) that she has a cat she didn't want any more because "he sits on her son's face"! and if she didn't find a home for him, she would put him to sleep!
Of course I've told her that NO vet would a healthy 5 years old cat to sleep but this was just bluffing as unfortunately there are always some vets on the island who do everything for money so I told her that I would try to find him a good home.
I contacted a nice couple who asked me already long time ago for a bit older cat and they were willing to adopt FRANK!
On the 19th April she took him to their house and Frank couldnt be happier! 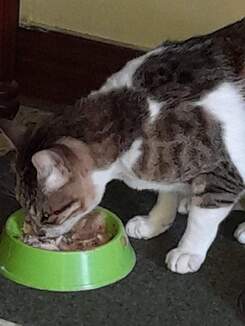 The feeder agreed that the female cat will be much better in our care so she joined our big cat family!
​We've named her PURDY. 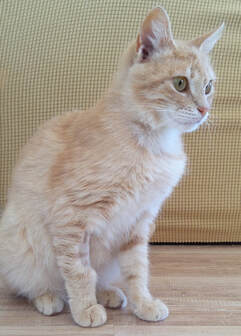 Dean had an appointment for a dental today but we cancelled as he's still traumatized from his stay at the vet and we couldn't give him any antibiotics which were needed before his dental.

We were asked by a feeder in Mellieha to neuter two cats who came in her colony lately and to take care of their recovery.
They were taken to the vet today and we were told by the vet that one of them, a female, was already neutered AND microchipped!
Her microchip isn't registered and we've tried to find her owner on our Facebook page "lost and found CATS Malta" but nobody showed up. Most probably she was abandoned as Mellieha is a favorite spot to abandon cats as there are so many places where they can't be seen.
She must have been a home cat so we can't put her back in the colony and told the feeder that we're willing to keep her here.

Roger had a dental today. 7 teeth were extracted and hopefully he'll feel better soon.
He already ate Recovery food in the evening so it seems that he's already feeling better but we'll have to see tomorrow as he had a painkiller injection which lasts 24 hours. 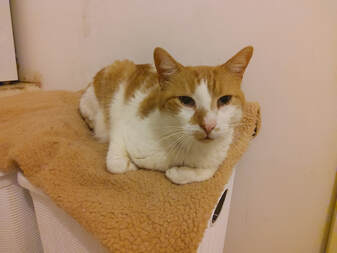 Dean came back home today.
He was still with the catheter and late afternoon he was flushed again.
He still didn't pee by himself and normally the vet would keep him there but Dean was very stressed so the vet saw it better to send him home and then we had to see if he pees at home.
Unfortunately the vet found out that he also has very severe gingivitis so he has antibiotics for 8 days and then he'll have a dental.
It's a BIG problem as Dean is a very lovely cat but he doesn't want to be touched and it will be a BIG problem to give him the medicine....
At least he peed in the evening.

EASTER....
Although every day is the same for us: no Sundays, no Christmas, no Easter, we always hope that these days are a bit more relaxing so we started today optimistic but unfortunately our day didn't start very well.
Dean, who we saved as a little kitten 5 years ago from a horrible woman (together with his brother Liam) started crying early morning.
​We really didn't know what was wrong with him but his crying broke our hearts...
Being Easter Sunday we didn't really want to contact our vet as Sunday is her only day off and she needs a break also but after observing Dean for a couple of hours and seeing that the situation didn't come any better, I HAD to contact her...
She answered straight away: she was having Easter lunch at her parents (as expected) but told me that she would open the clinic for us later. THANK GOD for having such a dedicated vet!!

In the mean time we continued observing Dean. He was going on the litter box several times, trying to do "something" but nothing came out.
Around 3 pm the vet told me that she was heading to the clinic so Charlie (my husband) left for her straight away and was in the clinic around 3.45 pm.
A bit later it was clear that Dean had a blocked bladder! No wonder he was in so much pain!
He was sedated and got a catheter in so he will have to stay in the clinic for a couple of days.

So... it wasn't a relaxing Easter Sunday for us but in the end we were very relieved that Dean was in good hands and that's the only thing what counts for us.
Tomorrow hopefully less headaches..... 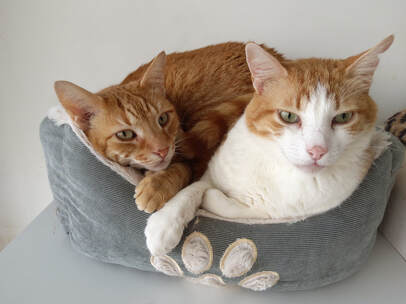 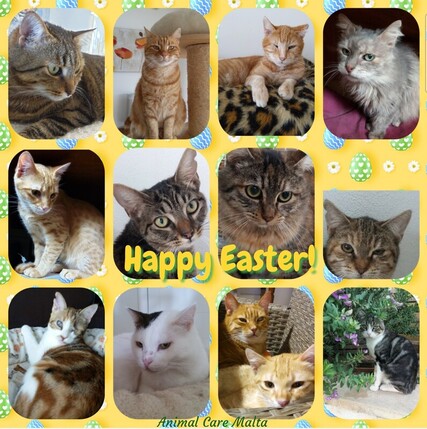