Saviour –how we named him- was taken to the vet today and had a thorough examination.
His front leg is swollen and infected, the cause could be a rat bite.
He had a long acting antibiotic and pain killer injection and in two days we’ll start giving him more antibiotics.
He was infested with fleas and ear mites and had tapeworm for which he was treated and once he was sedated
he was neutered also.
Hopefully his leg will be better soon but according to the vet this might take 2-3 weeks; of course he will stay
in our care until he’s completely recovered.

We received a phone call from a lady who’s feeding a colony in Mellieha and were told that there was a cat
with a very infected front paw.

New toys!
Handmade from scrap.
The cats just LOVE it!

Felix, the kitten who was rescued last week, is doing very well! 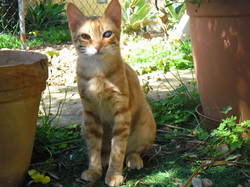 Mickey went to the vet for his first vaccination and to check his eyes.
We always thought that he already lost sight in his left eye when we found him but today’s examination showed that there’s still some light in it!
He’s having some more medication because according to the vet it could even improve!
Such good news!

This two to three weeks old kitten was rescued from his colony.
He’s very sick and dehydrated and has infected eyes.
With a lot of loving tender care we’re trying to save him….

At this time we’re not catching and neutering females because they’re all pregnant or already have babies.