Unfortunately there's bad news on the last day of the year as little Noah passed away at 4.35 pm.
It was obvious that he was very ill as today he was refusing any food and kitten milk, it looked like he couldn't even swallow any more.
He has been in my arms all day and just before he passed away he crawled up and touched my face with his little paw….
I'm devastated and can’t stop crying as I did everything to save this little angel; at least he died in my arms, cosy and warm, and not somewhere by himself in the cold…
R.I.P. little angel, we loved you so much and you will never be forgotten. 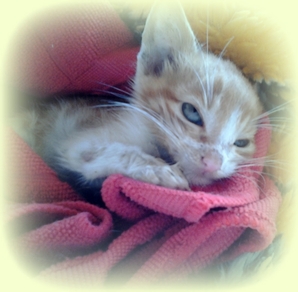 Nina lives in the streets in Floriana and her feeder noticed a big lump under her armpit. She was taken to the vet and operated last Tuesday.
It was a very serious operation so the vet kept her in for one night and brought her here this evening for recovery; she'll have to stay at least 10 days. 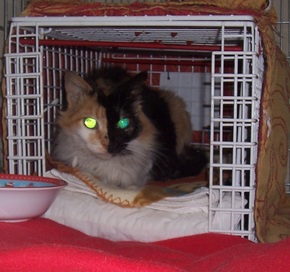 Noah was doing quite well the first two days but yesterday he stopped eating and we had to start force feeding him. Yesterday evening we were still happy because he gained 43 grams of weight in two days but today he was still not eating and after every (force) feeding he was vomiting.
According to Dr Victoria Bondin he could be nauseous because of the antibiotics and/or he’s missing his mummy…
Tonight his weight was only 386 grams so he lost 80 grams since yesterday, very upsetting!
Dr Victoria Bondin is coming to see him tomorrow afternoon and hopefully there will be better news. 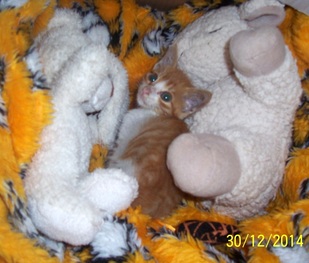 Mandy is living in a colony in Mellieha and her feeders noticed that she has diahrroea and wasn't eating well.
They brought her here for recovery and we will be taking care of her until she's well again. 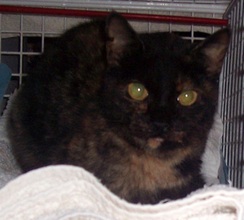 This morning Dr Victoria Bondin opened her clinic to see Noah.
His leg must have been cut already 3-5 days ago as it isn't a fresh wound.
There was already an infection so she took the pus out, cleaned the wound and gave him an antibiotic injection for 2 days.

So now it’s up to us. Hopefully he will gain some weight as he’s skin and bones (his weight is only 423 grams) and he’s very dehydrated.
The main aim for now is to make him strong enough to fight the infection and keep the wound clean.

Most probably his leg has to be amputated but he’s too young to do that now because it will affect his kidneys too much; he has to be approx. 4 months to be operated safely.

So he will stay here for the coming 4 months and maybe he will be adopted after. We already had some adoption requests but we can’t promise anything to anyone at this time as he has to recover first and has to be completely healthy.

We were overwhelmed with donations today! Thank you all so much! 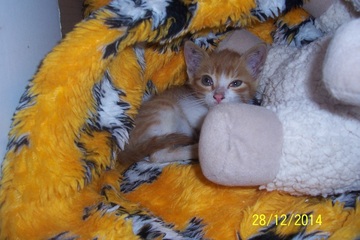 Sleeping with his "Sleep Sheep" which has a heart beat and he thinks it's his mummy :-)

A tiny kitten with a cut leg was found in a colony in Mellieha.
Most probably he was hiding for the rain and looking for some warmth in a car engine and when the car was started
his leg was cut off…
He’s safe and cosy now and tomorrow he will be seen by the vet. 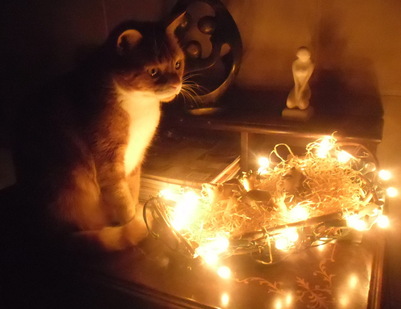 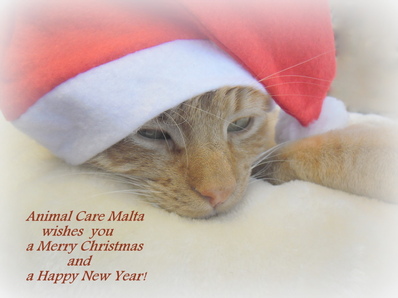 Big Daddy and Wanda were caught in their colonies and neutered. Sorry Big Daddy... ;-)


This morning we received very bad news. Picolino (aka Zorro) passed away.
He has been very sick this last week and the family who adopted him did everything to save him but early this morning  they had to let him go over the Rainbow Bridge.
When this lovely family adopted him last year he wasn't even up for adoption because he wasn't healthy at all but they insisted to adopt him to give him a good life.
And he HAD a very good life!
His immune system was very low and we can only say THANK YOU to Simone & Lewis and their children Juliette & Pierre to give him such a good life!.
RIP lovely Picolino.

MIMI and TOMY were neutered and doing very well.

On the 25th November 2014 we received an email from a young lady from Serbia who told us that she adopted two kittens about 8 months ago but that she was going back to her home country on the 3rd December and didn’t know what to do with them.
We’ve told her that we don’t have a sanctuary and that we couldn’t take them in but that we could put them on our website and on Facebook. What we did…

Last Monday we've sent her an email to ask if the kittens were adopted (as it happens a lot of times that people ask for help and never send us an update) and on Tuesday she replied: “No, I don’t know what to do with them so I don’t have an other option than putting them in the street” (!)
Of course we didn't want to let this happen so we went to pick them up today and they are safe and sound in one of our bedrooms now :-)

How irresponsible people can be?! Unfortunately this happens a lot here with East European people: they come to live here, they want some cuddly kittens, after some time they go back to their country and their cats end up homeless!
We don’t even ask anymore why they don’t take them with them because we know this is useless, they can’t care less and we only aim for the very best for the cats.

To mention even more irresponsibility: they are 10 months old, brother and sister, and NOT neutered!
Tomorrow they will be taken to the vet to be operated.

MIMI and TOMY are two gorgeous, lovely cats and we hope to find them a lovely home very soon! 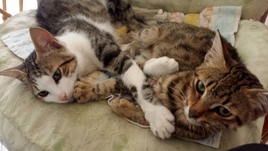