Billy-Joe was neutered today. About time as he's already 11 months old but we postponed it as he never looked very healthy and besides this: he couldn't do any harm as all the other cats are neutered.
He was also tested for FIV/FeLV and thank God he was negative!
After a couple of hours he was already as naughty as always!
​ 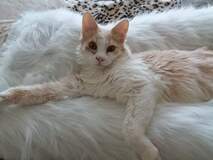 16th June 2019
We need your help!
We've reached the bottom of our funds!
Could you please consider to donate?
Thank you in advance!

Gingerlou crossed the rainbow bridge this morning.
Although she seemed to be much better lately, she stopped eating all of a sudden and this morning we found her not well.
We rushed her to the vet but nothing else could be done.
At least she had the best 6 weeks or her life with us and didn't die by herself in her colony.
RIP dear Gingerlou. 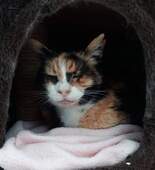 His story starts about 10 months ago when Daniela, a young foreign waitress, started feeding him in front of the pub where she was working, on a very busy and noisy road in Qawra.
He showed up there one day, waiting quietly for food and since then he came back every day late afternoon/evening.
But one day, in the beginning of April 2019, Bob didn't show up anymore. Daniela knew something was wrong and was devastated but three days later he came again: limping and obviously in pain.... a broken leg?
Daniela contacted Valentina, who was more experienced in trapping cats, and together they set up a plan to trap him; not an easy task as Bob wasn't a friendly cat but after a long wait Bob went into the trap.

That night they went into a battle without knowing what was yet to come....

They took him to Dr. Trevor's Clinic in Attard where Dr. George saw him; X-rays were taken which showed that Bob had a severe fracture in his shoulder which needed surgery with a pin and a plate and recovery in a cage for 8 weeks.
As this meant a HUGE bill, the girls lured him from one vet to another but eventually ended up at Dr. Trevor's Clinic again where Bob was operated on the 19th April 2019 by Dr. George (for sure the best orthopedic surgeon on the island!)
Daniela, the young waitress who works 2 jobs, paid all the bills which exceeded 600 Euro!

Bob was fostered by Valentina, in a recovery cage in her yard for 4 weeks and after that he went to another fosterer, Carole, who kept him in a cage in her garage for 3 weeks.

We only came across Bob last Friday (we didn't know about him) and seeing him so depressed in a cage for already 7 weeks broke our hearts so we decided to take him in.
At this time he's in a cozy room and when he's ready for it, he'll enjoy our sanctuary and garden for the rest of his life. 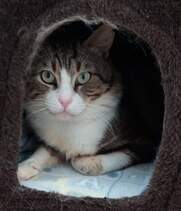 8th June 2019
OLIVE, the little girl who was found abandoned last weekend in the middle of nowhere, went to a lovely forever home today!
Her new parents, Adrienne and Andrea, did everything to make her feel at home and she settled in straight away!
Her new name is CHICKA.

6th June 2019
Fuxa went to the vet as he had skin problems.... again...
He was doing very well lately but as soon as summer starts he always has this problem.
He had a steroid injection and we were given a spray to help the skin to heal.
​Fingers crossed.... 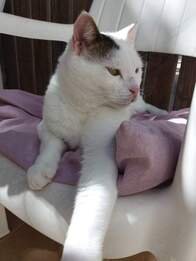 4th June 2019
Gingerlou is still doing well.
The vet advised us to put her to sleep almost 5 weeks ago but we wanted to give her the very best (last) days of her life, after living in a colony her whole life, and we're still happy that we made this decision as she seems to get better instead of worse!
She's very thin and doesn't eat that much but she likes her (special) food and looks happy in her secure place for the first time in her life...
Of course we monitor her all day and as soon as her breathing will become difficult, we will take the decision we'll have to take, we know that she can't live very long, but for now she's happy. 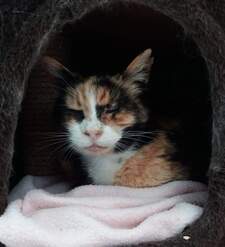 We've received a request to re home two lovely young cats because their owner found out that he's allergic to cats. We receive emails/messages like this every single week as this is the most used excuse to get rid of unwanted cats but his case is genuine, we've received the allergy test from hospital which shows that the owner is very allergic.

So.... Achille and Luna need a lovely forever home!
They are siblings, a male and a female, 1 year old, both neutered and vaccinated.
They grew up together and can't be separated.
If you're willing to give them a forever home, please contact us.

Last Sunday a small female cat was found abandoned in the middle of nowhere, left with a hand full of dried biscuits and a little water.
She was running from car to car looking for her family but of course they were not there....
She was picked up by a kind couple who took her home and gave her a place for a deep sleep but unfortunately they can't keep her.
Today we neutered her and by the end of this week she needs a good home!
She's still a baby, only 6-7 months old, and the only thing she wants is to be stroked and be in your arms.
Please open your heart and give her a good home! You won't regret it!
​ 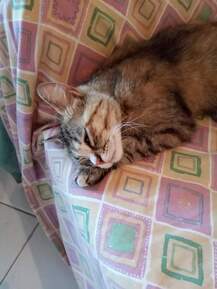