We've dreaded this day but today our vet came to give LOLA her wings and send her over the rainbow bridge.
Fly high sweet Lola, we'll never forget you and will love you forever! We're very worried about Lola who has nose cancer; she was doing quite well with the medication we're giving her but this last week she came much worse and we think it's time to let her go.
We're very VERY sad about this....
The vet will come this week. 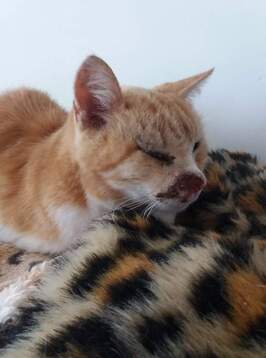 On the 27th August 2020 Animal Welfare (government) asked us if we could take in two home cats as their owner had to go to a home.
Although we were already full up, we felt sorry for the elderly lade and agreed as long as Animal Welfare would do all necessary check ups (blood tests etc).
They agreed so we were expecting these 2 cats the next day to come here but it was obvious that these cats weren't taken care off! They were full of fleas, had ear mites and one of them had dermatitis behind both ears and a severe ear infection.
Although the previous owner stated that they were neutered, it's still a mystery, one of them was neutered at APH (the animal hospital which is used by Animal Welfare) but the other one couldn't be done because of her condition.
In the mean time the were kept at Animal Welfare which is not the best place to be.... in fact it's the most HORRIBLE place... see pictures.... so we've told them to bring them here as soon as possible and if the other one still would need to be neutered, we would take care.

This is how they were at Animal Welfare

On the 24th September 2020 they were finally brought here and, as expected, they were traumatized after one month at Animal Welfare!
They were very afraid and hiding but little by little we're gaining their trust.
Hopefully I can show you some happy pictures soon! 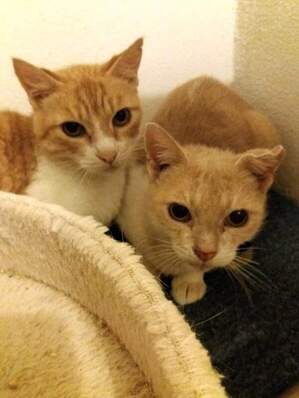 We were also busy with catching kittens in the colonies who are fed by Charlie (my husband).
He feeds approximately 130 cats in colonies very early in the morning (to keep them safe before traffic starts) and we neutered ALL of them a few years ago but people are dumping cats and it needs only ONE female (not neutered) to create a new problem.
So there were a lot of kittens lately and we started catching them.
These were the first ones... another 3 look exactly the same so we have 5 of them at the moment.
​Other pictures will follow. 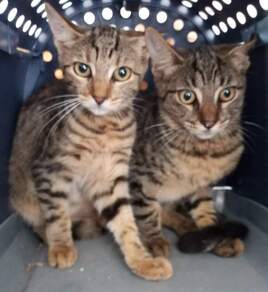 Another kitten with a bad eye was caught in one of the colonies.
We took him to the vet and unfortunately he had glaucoma and his eye had to be removed.