Milo was neutered and micro chipped.

Alexia had a good check up. She was tested negative for FIV/FeLV but has a bad cat flu.
She had an antibiotic injection and will be on antibiotics for another week.
She's not eating so we are force-feeding her with a syringe....

Sophie had a check up and her tail is perfect! She looks like a Manx cat now!

Vet visit.
A female was neutered and the cat who was caught yesterday had a good check up. She had ulcers on her tongue and her throat so she had a steroid injection which will last for 6 weeks.
She will have antibiotics for one week.

The feeder of a colony called and told us that one of the cats she's feeding couldn't eat because of mouth problems.
So.... on this -very hot- Sunday, when everybody was enjoying the sea or the pool, we went to catch this cat....
We'll take her to the vet tomorrow. 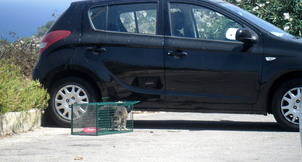 
Milo was brought here this evening.

A very nice kind-hearted man from Ireland, Trevor, is working for about 6 months in the docks in Malta and he and his wife Ann are real cat-lovers. Trevor is feeding a colony of cats in the docks every morning and evening and got very attached to one particular cat: Milo.
Ann contacted us some weeks ago and told us that they would like to bring Milo over to Ireland and asked us if we would be willing to help them with the paperwork, vaccinations, etc.
Of course we were willing to help them but the biggest task was to catch Milo and bring him here.
It’s a stray cat who’s not used to people and the only human being he knows is Trevor…
We gave Trevor a cage/trap some weeks ago and finally he managed to trap him this evening and to bring him here.
He’s in a cage in our cat-garden and we will try to socialize him and get him ready for his journey to Ireland in September.
He’s so scared but in the end he will be in his forever loving home in Ireland for the rest of his life!
It’s heart breaking that he doesn't understand yet…. 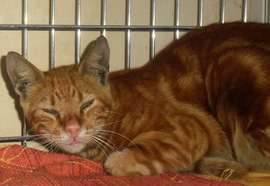 In the morning we got a phone call from a lady who told us that she found a small -abandoned or lost- Persian a few days ago and that she couldn't keep her so we went to pick her up in the afternoon.
The state of this little girl is really heart breaking: she’s skin and bones and weighs only 1900 grams.
She will be seen by the vet next week and in the mean time we’ll try to keep her as happy as possible.
We’ll try to find her owner and if we don’t find him/her we’ll see…. either we’ll find her a very good home or she’ll stay here forever…

Our home-vet visited us today.
Odin, Andra, Lilly, Sophie and Bebbuxa had their first vaccination.

Fuxa is still a big worry!
It's like his nose doesn't come better but now he has other medication for his fungal infection and hopefully he will better soon!

Sophie's stitches were removed today and it looks very good!
She had a little reaction to the stitches but after having antibiotics for 3 more days for sure she will be fine!

Tribal Mark Junior, a small female, and Jake, a male we were trying to catch for 2 years (!) were neutered.
They both live in colonies we're taking care of; Jake will be released tomorrow, Tribal Mark Junior will be pampered for a week in our recovery.

Two small males were caught in their colony and neutered.

Sophie went for a check up and everything is fine! She had another painkiller and antibiotics injection and the stitches can be removed in a week's time. 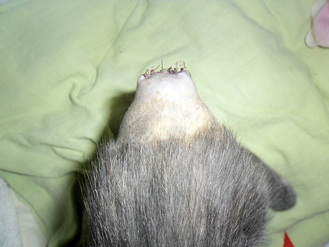 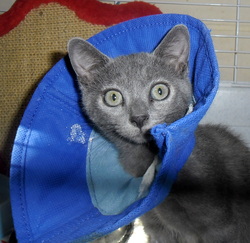 
Our biggest fear came truth today. In the evening we saw that Sophie's tail came black all of a sudden so she was rushed to Centru San Frangisk (animal hospital) where her tail was amputated immediately.
It was a hell of a night because she's still so small and our biggest fear was that she wouldn't come out of the anaesthetics but Dr George did a great job and after giving her an anti-sedan injection she was already very lively after a couple of hours.
In two days time we'll take her for a check up.


Faye Kennerley, a volunteer at Oldham Cats Rescue in Manchester UK, visited us.
It was a real pleasure to exchange experiences and work ethics and we hope to meet again!
www.oldhamcats.co.uk 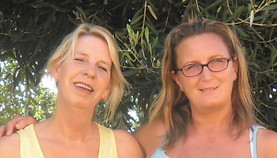 Odin, Andra and Bebbuxa were micro chipped and had their rabies injection.
Odin and Andra are adopted in the Netherlands and Bebbuxa is adopted in Ireland so we are preparing them for their flights.