28th September 2019
Billy-Joe was feeling a bit better today.
We were force feeding him but this morning he started eating by himself and was obviously feeling better.
Hopefully we'll have more positive news in the coming days. 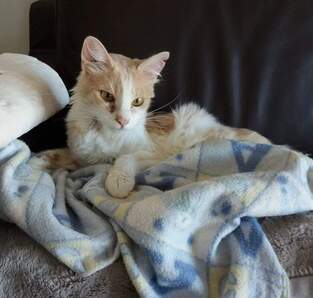 We had a big shock yesterday evening when we found our Billy-Joe gasping for breath, not able to use his back legs and a very fast heart beat.
We rushed him to our vet where he was placed in the oxygen chamber immediately and after half an hour they were able to take X-rays.
He had fluid on the chest and was very critical.
He stayed in the oxygen chamber until 4.30 am and this morning he was out of the wood.
Blood tests and a heart ultrasound were done this morning, bloods were fine but his heart didn't look good as he has a quite bad heart murmur, according to the vet he must have been born with that and had a heart attack.
This afternoon we could take him back home as he wasn't eating at the vet, most probably because of stress and sadness.
He needs heart meds for the rest of his life and his life expectancy isn't very long (only 1 year according to the vet) but of course we'll try to give him the very best life and will pamper him to the max!

Please support us to continue taking care of him and donate!

We had to say goodbye to Twistee this morning.
We took him in in October 2016 when he came in one of our colonies.
He was a beautiful cat but his head was twisted (hence his name) and his eyes were not right;he was very handicapped so we took him in, he must have been approximately 10 years at that time.
These last months he was blind and deaf but still enjoyed being here: eating a lot and jumping around, even last night.
This morning we didn't see him and when we went to search for him in our garden, we found him dead...
Very sad but he was old and we knew his time was coming.
​At least he had a very good life for the last 3 years.
RIP dear Twistee. 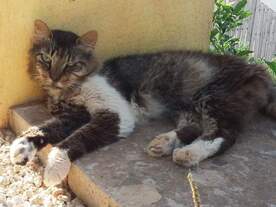 6th September 2019
And finally the day arrived that we had to say goodbye to Weasley.
It was an emotional day as we all love him so much and we can only hope that he'll have a safe and comfortable journey to the UK.
Bon Voyage Weasley!

3rd September 2019
Lee and Paul, who are taking care of the cats at Mellieha Bay Hotel, came to see Weasley who will be leaving to the UK soon (where he was adopted).